Up 24% against major currencies since May 2014, the greenback is putting pressure on earnings of U.S. exporters and multinationals. 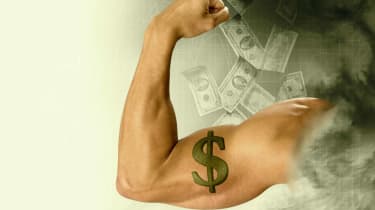 Why has the dollar been so strong? A number of reasons. Our economy has been strengthening, especially relative to the economies of Europe and Japan—and even compared with the economy of China, where the rate of growth outpaces ours but is slowing. Our trade balance has improved, thanks to a boom in energy production, which has drastically cut oil imports. At the same time, the U.S. budget deficit is shrinking. That all helps to attract investment in the U.S. But a huge impetus for the surging dollar is the gap between interest rates here and abroad. The 1.9% yield on the 10-year Treasury bond may seem paltry, but it beats 0.2% on Germany’s 10-year note and 0.4% on Japan’s. That situation is unlikely to change soon. The Federal Reserve is the only major central bank expected to raise rates this year; many others have cut rates or are providing monetary stimulus in other ways.

How does a strong dollar affect the world’s economies? A stronger dollar has been a lifeline for struggling economies in Europe and Japan, boosting exports, relieving deflationary pressures and lifting global growth in general. But a beefier greenback is bad news for financially stressed countries with high debt burdens denominated in dollars. In that camp put South Africa, Turkey and Venezuela. Because oil and other commodities are priced in dollars, the currency’s strength hurts commodity exporters (such as Brazil and Russia) while helping heavy commodity users (China). In the U.S., the economic impact of a stronger dollar will likely be modest; figure that every 20% rise in the dollar might shave a half-point from growth in gross domestic product. The brawny buck detracts from growth because it hurts sales of U.S. exporters, whose products become more expensive overseas. By the same token, imports get cheaper, and that helps boost consumers’ purchasing power—and their spending accounts for 68% of U.S. GDP.

What does the super buck mean for U.S. investors? Over the long haul, not much. The direction of the dollar isn’t a reliable predictor of stock prices in itself. For example, stock prices and the value of the dollar rose simultaneously between 1980 and 1985, but moved in opposite directions from 1985 to 1987. From 1995 to 2001, both were on the upswing, but from 2001 to 2008, the dollar sank and stocks rose. Since 2011, the dollar and stocks have risen in tandem. At the sector level, though, a rising dollar seems to favor stocks of companies that depend on consumer spending on non-necessities (think retailers and restaurants) and financial firms, while energy companies thrive when the currency is weak.

Then why has dollar news been roiling the U.S. stock market? Investors worry about the hit to the earnings of U.S. exporters and multinationals. A strong greenback hurts firms with foreign operations because sales and profits generated abroad translate into fewer dollars. Overall, firms in Standard & Poor’s 500-stock index derive 46% of sales overseas; for energy and materials companies, it’s a bit more than that. Technology firms depend on foreign sales for 56% of revenues. In January, analysts expected that earnings for tech companies would rise more than 10% in 2015; forecasts now call for growth of just 6%. Firms warning that the stronger dollar will hurt 2015 results range from DuPont to PepsiCo.

How much more can the dollar appreciate? Most of the move has been made. In fact, some analysts think the dollar has already peaked. For the dollar and euro to be at parity—that is, one dollar equals one euro—the buck would have to increase 8%. To expect that to happen seems a stretch, at least for now.