The Biggest Winners of 2006

The stocks with the largest returns for 2006 will surprise you. It proves that sometimes, basket cases do get over their illnesses -- or the market thinks they can.

If someone offered you free shares a year ago of Northwest Airlines, Delphi and Calpine or tickets for Powerball and Megamillions, chances are you would have taken a shot at one of the lotteries. I know I would have. All three of these one-time business titans entered 2006 operating under Chapter 11 bankruptcy protection and trading on the "pink sheets," which often serves as a hospice for shares of failing companies.

Depending on ailing General Motors, its former parent and largest customer, Delphi’s future seemed particularly bleak. So how did these three basket cases place in Morningstar's top five gainers list for 2006 among all stocks with a total market value of $250 million or more? And, for that matter, who are some other big winners?

These are not small gains, by the way. Northwest Airlines (symbol NWACQ.PK), which started the year at $0.54, soared 992% through December 12. Delphi DPHIQ.PK), which started at $0.30, rocketed 965%, while Calpine (CPNLQ.PK), which came into the year at $0.21, increased a relatively pedestrian 458%. Each is still a massive loser over the past few years, so the 2006 performance proves only that you can make fast money even on basket cases if the timing of your wager is right.

Northwest’s shares rebounded in the wake of US Airways’ amazing recovery and the improved fortunes for the airline industry. Delphi, which is up for sale, has made some progress in improving its operations and has trimmed GM business from 60% of sales to 45%. Moreover, GM itself is breathing a little easier. Calpine, a “merchant energy” company that builds speculative power plants around the world, is approaching break-even on operations after some enormous losses.

But does this mean that there’s still more moola on the table? It’s doubtful. Delphi is likely to be broken up, and the terms of its sale will determine if there’s any further payoff for the common stockholders. Northwest, like the airlines in general, is not out of the woods. Calpine’s balance sheet is a fright, with billions of dollars in negative shareholder net worth. The road back to prosperity will surely be arduous. You can argue that all of these stocks got oversold, but once a company is in Chapter 11, most professional investors don’t want to hold the shares for long. So the bottom for these kinds of stocks is unusually hard to find.

It would be a hopeful sign if you saw the bonds or stocks of any of these three names on the list of holdings of Third Avenue Value (TAVFX) fund or Third Avenue Small-Cap (TASCX) fund. Third Avenue wizard Martin Whitman has a nose for sniffing out value in companies that are reorganizing under bankruptcy protection. But lately Third Avenue has been buying strong companies, such as Toyota, not weak ones. So, it’s probably best to adhere to the conventional wisdom and stay from anything that’s in Chapter 11 unless you are willing to zero out your entire investment.

The year has also seen shares of some profitable companies zoom. The top supergainer is Force Protection (FRPT.OB), another pink sheeter but one that has applied to trade on the regular Nasdaq. This South Carolina firm makes blast-protected vehicles for the Marines that can withstand exploding roadside bombs. Needless to say, these are lifesavers in Iraq and Afghanistan. So this little company is now not-so-little. Its stock is up 1,600% in 2006, from $0.74 to more than $13.

That gives it a price-earnings ratio of more than 100 and a price-to-sales multiple of six, so it’s expensive, but is it so expensive that it cannot rise again? Not necessarily. Force Protection gets little attention from analysts or investment managers. The two-voter forecast of 58 cents a share in earnings for 2007 means little because this company depends on military orders and that depends, at least to some degree, on what happens next in Iraq. Many other small-company defense stocks are sputtering. Shares of this company smell like they’re one downbeat press release or quarterly report away from a gigantic profit-taking party.

We called Force Protection’s offices near Charleston to find out more but so far haven’t received a reply. Directors and executives have been busily selling shares of late, at around $8 and $9 a pop. Can’t say I blame them, but it sure is a sign of caution.

Biotech startups are crapshoots, but if you guess well, the payoff is big. Medivation (MDV), which is on the American Stock Exchange, went up from $2.53 in early 2006 to around $17 and sold a private placement of stock in December for $16.25 a share. This dilution doesn’t hurt much if you invested at $3, but at $17, you’ll need more good news. Medivation has drugs for Alzheimer’s and other illnesses in development. The stock flew after the release in September of favorable test results from patient trials in Russia. But the company’s lead drug candidate is still in phase two of the three-phase U.S. procedure for getting a drug approved, so the risk is great.

Then again, no stock goes up 500% in a year unless something is uncertain, funky or speculative. Morningstar finds that 156 stocks that now have a market value of $250 million or more have at least have doubled so far this year. I can’t say I picked any of them or own any, but who would have ever thought to bet on Calpine and Delphi in search of the investment equivalent of a Powerball jackpot? 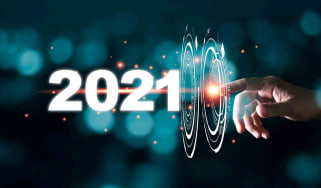 The Nasdaq cleared its September highs Wednesday despite a second straight week of rising unemployment claims that slowed the other major indices.