Should You Buy or Rent?

Renting may be smarter if home prices in your area will fall further.

If you're a renter, you may be champing at the bit to buy a house after watching prices fall for four years. Is it time to jump? It may well be, especially if you want to capture the home buyer's tax credit (you'll need to have a contract by April 30 and close by June 30). But before you leap, you need to go beyond calculating the impact on your monthly budget and figure out how much home-price froth is left in your local housing market.

Encouraging signs. A key number to consider when switching from renter to homeowner is the price-rent ratio. This figure compares a city's median home price with its median annual rent. At the housing market's peak in 2005, the national median home price had inflated to nearly 21 times the median annual rent. By the third quarter of 2009, however, the ratio had deflated to 15, returning to the historical norm, according to Hessam Nadji, managing director of Marcus & Millichap, a commercial real estate brokerage company in Encino, Cal.

If the price-rent ratio where you're looking to buy is 18 or higher, your market may still be in the bubble zone, with a greater probability that home prices will fall after you buy. That could put you underwater -- meaning your home would be worth less than what you owe on the mortgage. If the ratio has fallen below 15, there's less chance that home prices will sink.

The table on Rent or Buy below shows the ten cities in which home prices are least likely to drop further, as well as those most likely to fall further, based on price-rent ratios. We also show the gap between median monthly apartment rents and median monthly mortgage payments. Five years ago, the difference between monthly mortgage payments and rent was $745 nationally; by the end of 2009, it was just $181.

To get a rough estimate of your local price-rent ratio, divide the average list price of several homes that meet your criteria by the average annual rent of several rental units with the same number of bedrooms and comparable amenities.

Weighing the decision. A year ago, the price-rent ratio in Phoenix was 14 -- down from almost 19 a year earlier. Home prices had fallen by half, and mortgage rates were at historic lows. Financial planner Brendan McNamar decided it was finally time for him to buy. He had rented since moving to the city in 2006, just after the housing bubble peaked, and was sitting on a nice nest egg from a home he had sold in 2004.

McNamar shopped for a long time, made offers on several houses and eventually bought a ten-year-old, four-bedroom, three-bathroom short sale listed for $219,000. (In a short sale, the sellers get permission from the lender to sell for less than the mortgage amount.) The house had sold for $355,000 in 2007. McNamar offered the full price, which the bank eventually accepted after 90 days. He put down 20% and took out a 30-year mortgage with a low fixed rate of 5.25%. He pays $1,176 a month (including taxes and insurance), which is more than twice his former monthly rent of $550. But because he hadn't owned a home in the past three years, he was able to snag the $8,000 first-time home buyer's tax credit.

From an investment perspective, McNamar wanted a house that would allow him to break even or earn a profit if he sold in three years. But given that prices have fallen even further in Phoenix since last spring -- the price-rent ratio is a rough guide, not an infallible one -- he reckons that his break-even point now may be four years away. But it's not a big financial setback to him because he has no plans to move.

Good deals for renters. Renting can be a smart strategy while waiting for this choppy housing market to settle down. Consider Jeremy Portnoff and his wife, Heather, of Edison, N.J. By mid 2009, the median home price in Edison had fallen a healthy 19%, to $317,000, from the market's peak in mid 2006.

The Portnoffs had their heart set on a home with three or four bedrooms to accommodate the family they hope to have, plus an office for Jeremy. The house they could afford was a starter home, probably a small townhouse -- which, on an after-tax basis, they figured would cost them about the same as renting.

But the Portnoffs also figured that if they sold it in three years, real estate commissions would consume any gains they could reasonably expect. Plus, Jeremy believed that the price of their ideal home in that area would continue to decline.

So they took a pass on buying and got a great deal on renting a two-bedroom townhome -- $1,550 a month, $300 less than when they looked at the same development three years before. The couple prudently plan to continue to pay down debt and save for a larger down payment on their next home.

In some markets, rental prices have dropped as supply has increased. By the end of 2009, the vacancy rate nationally had grown to 8.2%, a 30-year high, according to Nadji, of Marcus & Millichap. Meanwhile, rents had fallen 5.8% from the year before.

Markets with the highest vacancy rates include Jacksonville, Fla. (forecast at 14% in 2010), Atlanta, Houston, Las Vegas, Orlando, Phoenix, Tampa and Tucson. Renters in such markets can afford to shop around and negotiate hard. A building's leasing manager may be willing to lower the rent to attract or keep your business.

Nadji expects the vacancy rate nationally to tighten up a bit (to 7.8%) by year-end and start a rapid recovery beginning in 2011, with very strong rent growth between 2011 and 2015. Demographics (five million people will enter the peak renter age range of 20 to 34 over the next decade) and plummeting construction starts in 2009 and 2010 drive his forecast.

Not all cities have an excess of rental units, though. In some large cities, such as New York, downtown Chicago, San Francisco, Los Angeles and Washington, D.C., vacancy rates have remained tight -- and home prices have remained stubbornly high. 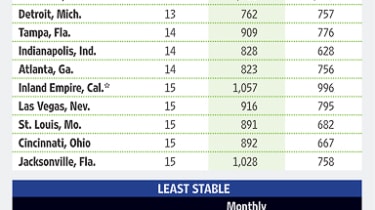 Buying a home may be one of the biggest purchases you will ever make.
11 Things Every Home Seller Should Do

11 Things Every Home Seller Should Do

As a home seller, your goal is to sell your property quickly for the most money possible.
13 Reasons You Will Regret an RV in Retirement

RV-loving retirees talk about the downsides of spending retirement in a motorhome, travel trailer, fifth wheel or other recreational vehicle.
Skip to ContentSkip to Footer