The market’s already one step ahead of you when it comes to digesting the impact of geopolitical turmoil. 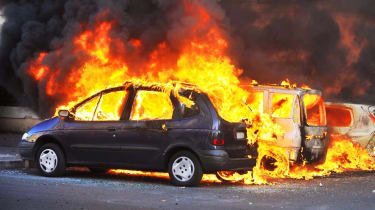 Beheadings in Iraq and Syria. Terrorism in France. An extremist regime in Iran closes in on obtaining nuclear weapons. Europe and Japan struggle to revive stagnant economies. No question, it’s a scary world.

But one of the most important lessons investors must learn is not to let the news—including the economic news—affect their strategy.

Why? Several reasons. But first, let’s get something straight. In truth, the world is a lot less dangerous today than it has been for most of the past 100 years. That period saw two world wars, the Great Depression, and a cold war between the U.S. and the Soviet Union that came within an eyelash of exploding into a nuclear holocaust during the 1962 Cuban missile crisis.

You think the fanatics of ISIS are frightening? They’re "evil lite" compared with Hitler or Stalin, who were responsible for the deaths of millions. The financial meltdown of 2008 led to job losses that resulted in a 10% unemployment rate. The jobless rate in the 1930s was 25% for a prolonged period.

And here’s the surprise: The U.S. stock market has often gained ground even in the worst of times. True, the onset of World War II sparked a bear market. But by 1942, investors became confident that the Allies would ultimately prevail, igniting a bull market that would continue past V-E Day and V-J Day. Stocks also rose during the Korean and Vietnam wars.

What’s going on here? It’s not war profiteering by greedy capitalists. The reason stocks rise when things seem gloomiest—and this is a crucial point—is that the market doesn’t reflect today’s news. Instead, it looks ahead and anticipates how things will turn out tomorrow.

That’s why the market is called a discounting mechanism. When you read today’s news, the events have already been priced into stocks—albeit often imperfectly. That’s also why the return of Standard & Poor’s 500-stock index is a component of the Conference Board’s index of leading economic indicators, which is designed to predict the economy’s direction.

The U.S. currently looks like the world’s strongest developed economy. But that doesn’t mean U.S. stocks will rise over the next year or two; it explains why they have already soared. Indeed, the economy was still in freefall when the current bull market began on March 9, 2009. Similarly, during the Great Depression, the stock market hit bottom and turned back up in 1932 when the economy was still collapsing.

The inability to use the news to predict the market is a big part of why calling market turns in advance is close to impossible. But if you want make modest changes in your asset allocations—how your investment money is divided among stocks, bonds and cash instruments—focus on valuations, not the news. That’s because reversion to the mean is a powerful force in investing.

Reversion to the mean is the tendency for things to return, eventually, to their long-term averages. U.S. stocks historically have traded at an average price-earnings ratio of 15.5. The S&P 500 today trades at 17 times analysts’ 2015 earnings estimates. That’s above average, but not crazy. The MSCI EAFE index, which tracks developed foreign markets, is cheaper, at a bit less than 15 times estimated earnings. Emerging markets are cheap, with a P/E of 12.

Meanwhile, bonds are richly priced, with the benchmark 10-year Treasury paying a paltry 2.1%. The yield has never been that low before for a protracted period—even during the deflation of the 1930s. If yields ultimately revert to their long-term averages, the 10-year Treasury will yield about 5%--and bond prices, which move inversely from their yields, will plunge. Don’t hold your breath waiting for 10-year Treasuries to yield 5%; it may be years before they pay that much. And you’ll be lucky not to lose money in long-term bonds over the next few years.

In short, it’s fine to tinker on the margins of your investment allocations based on historical averages. But don’t look for guidance in the headlines. That’s a fool’s errand.

From Betterment to Ellevest and Weathsimple, socially responsible investing apps are gaining steam. And those worried they’d have to sacrifice returns…
Drawing Down Retirement Savings in a Pandemic