Even with the recent run-up, yields remain ridiculously low, and the risks of owning bonds are huge. 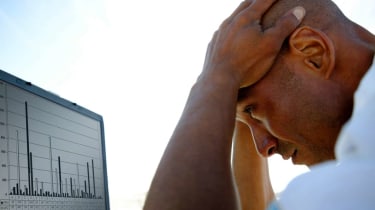 Benjamin Graham, the father of modern security analysis, likened investing to doing business with a manic-depressive person. One day, he’d be overjoyed to buy a security from you at an extraordinarily inflated price; the next day, he’d be sobbing and want to sell it back to you for a pittance.

Graham, of course, was exaggerating to make a point, namely, that you should buy and sell securities based on their value—not on your mood or your gut feelings.

But every once in a while, the market really does lose its mind. And when it does, the illness tends to last so long that it begins to seem normal, even to ordinarily savvy investors. So it was in the late 1990s with tech stocks. And so it is today with the bond market.

Let’s start with the basics. When you buy a bond, you essentially lend money to a company or government with the promise that it will pay you some interest and repay the IOU in full at maturity.

A bond’s yield–in simplest terms, the interest it pays as a percentage of the price of the bond—should depend on three things:

Once these things are determined, you should add a little bit to allow yourself some profit on your investment. That’s the commonsense way to value a bond.

Now consider the 10-year Treasury bond, which is the benchmark for the U.S. bond market. Almost all other bonds key off its yield. It currently yields 1.99% (all yields are as of February 10).

The chance that Uncle Sam will default on his obligations is extremely low. So for Treasuries, “credit risk” is not especially important.

The next question is: How much will your dollar be worth in 10 years, when the IOU matures? Thanks to the collapse of oil prices, inflation has been tepid lately. The consumer price index rose just 0.8% in 2014. But since 1926, inflation has averaged about 3% annually, with much higher readings in the late 1970s. So why would you expect inflation to be 2% over the next 10 years—a rate of price increases that would allow you simply to break even on the 10-year Treasury at its current yield (and we’re not even considering the impact of income taxes)? Mild inflation, 2% or so per year, is a fact of life in modern economies—and a target that central bankers aim for. But in a healthy economy, inflation tends to overshoot 2%.

And six years after the financial crisis, the U.S. economy is beginning to look positively robust. Real gross domestic product has risen between 2.6% and 5% in five of the past six quarters. The economy has created an average of 250,000 new jobs a month over the past year. The unemployment rate has fallen to 5.7%. Auto sales are running at an annual pace of almost 17 million vehicles. Bank loan volume increased almost 8% in the past year. And thanks in great part to the plunge in gasoline prices, consumer confidence is at an 11-year high.

The Federal Reserve is gingerly preparing the markets for its first rise in short-term rates since the financial crisis. In sum, all signs point to bond yields rising.

Yet the 10-year Treasury today yields less than it ever has since 1870—except for a brief dip in 2012. The 10-year never traded this low during the Great Depression, when the economy was beset by deflation. Over the past 75 years, the economy has experienced almost uninterrupted increases in prices, yet today’s 10-year Treasury is pricing in virtually no inflation. Perhaps that’s why the Treasury yield has climbed so sharply since bottoming at 1.65% on February 2, its biggest jump since the middle of 2013.

Jim Paulsen, chief investment strategist at Wells Capital Management and the source for many of the statistics in this article, is one pro who’s sounding the alarm bell about the dangers of owning Treasury bonds, which were among last year’s best investments. “Does this sound like an economic environment which should legitimately have a 10-year bond yield lower than it was at any point during the Great Depression?” asks Paulsen. He describes the level of Treasury yields today as “ridiculous, absurd, ludicrous, wacky.”

Now consider Europe. With a whiff of deflation in some economies, the government bonds of several eurozone countries actually sport negative yields. That’s right. Investors are paying governments for the privilege of lending them money. This is simply beyond comprehension. Why would you lend your money to anyone and pay for the privilege? Why not just lock your cash up in a safe?

European investors have poured money into U.S. Treasuries to get their relatively attractive yields and to profit from the surging U.S. dollar. (Investments in Treasuries and other dollar-denominated securities translate into more euros, yen and other currencies as the buck gains strength.) That has pushed Treasury yields ever lower.

As yields fall, bond prices, which move in the opposite direction, have reached absurd heights. I’ve been wrongly predicting that yields would rise for years, so I can’t tell when this madness will end. But a rise in yields on the 10-year Treasury of just one percentage point would cause its price to plunge about 9%. A two-percentage-point bump in yields would cause almost double the damage.

What should you, the investor, do about all this? Stick to bond funds with relatively short average maturities. If you’re willing to take some risk, buy funds that invest in some lower-quality corporate bonds. I recently wrote about my five favorite bond funds for 2015. I still like them. They won’t make you rich, but neither will they send you to the poorhouse.