Vanguard founder John C. Bogle died Jan. 16 at age 89. But "Saint Jack," who built the index fund from virtually nothing into a $5 trillion empire and was a boon to individual investors, had already cheated death several times before. 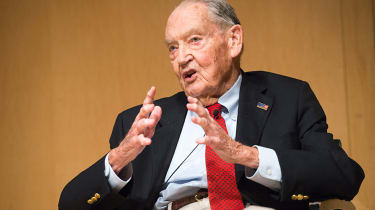 They called his quixotic little mutual fund “Bogle’s Folly,” “a sure path to mediocrity” and even “un-American” after he introduced it in 1976. But Vanguard founder John C. Bogle – who died Wednesday, Jan. 16, at age 89 – had the last laugh.

Vanguard has grown into a $5.3 trillion juggernaut with 16,600 employees worldwide, making it one of the world’s largest investment companies. And what has fueled (and continues to fuel) its long-lasting growth is low-cost investing, in general, and the index fund, in particular.

Bogle’s many admirers called him “Saint Jack” for his efforts to slash investing costs. His thoughts and investing lessons inspired a popular investment website, Bogleheads.org, which describes itself as offering “investing advice inspired by John Bogle.” He authored numerous books, almost all after leaving Vanguard in 1999, and they all made the same basic point: Costs are virtually everything in investing, and index funds are the best way to deliver low costs.

Bogle was fortunate enough to live to see his ideas not just triumph, but become conventional wisdom. At Vanguard, he worked relentlessly for 20 years to cut fund costs. He launched product after product, seemingly unable to find a corner of the market that didn’t deserve an index fund.

They grew slowly at first. Until the 2000s, index funds were never the main event. In the 1980s and 1990s, the brilliant, gun-slinging mutual-fund manager was the star. Find the right manager, and you could make a fortune – those were the words that inspired many of us.

Indeed, Vanguard itself has its share of good, actively managed funds; Bogle was instrumental in starting many of them, too. Most notably, he commissioned Wellington Management and Primecap to each mange several Vanguard funds.

A Young Bogle Draws His Plan

The son of a World War I veteran who lost his fortune in the Great Depression, Bogle was a man who always watched his nickels and dimes. Born in 1929 in Montclair, New Jersey, he won a scholarship to the Blair Academy, where he was voted “most likely to succeed” by his classmates. Even then he showed an unusual aptitude with numbers. In later years, a colleague at Vanguard said Bogle could run his finger down a lengthy column of numbers and instantly point out a mistake.

He won a scholarship to Princeton University, where he waited on tables to make ends meet. Bogle’s senior thesis, penned in 1951, offered a stunningly accurate roadmap of the future course of his life. Everything he did was basically laid out in his thesis.

“Investment companies should be operated in the most efficient, honest, and economical way possible,” a young Bogle wrote. “Future growth can be maximized by reducing sales charges and management fees,” he posited. “The principal role of the investment company should be to serve its shareholders.”

Such thinking was anathema on Wall Street at the time. (Indeed, in many ways, it still is.) Stock brokers charged huge commissions on stock trades. Mutual funds typically imposed large front-end loads, up to 8.5%, and annual fees of well more than 1%.

But Bogle opened the door to another way to run a fund company. By charging dirt-cheap fees, Vanguard’s funds gained ground on their rivals. As the low-cost advantage attracted more investment dollars, Vanguard could afford to cut its prices further, continuing the cycle.

What’s more, Bogle brought to Vanguard the radical notion that a mutual fund firm should be run like a mutual insurance company. Its customers (investors) should be the owners of the funds; thus, only one set of shareholders could profit from them. Vanguard had no outside shareholders, so it had no incentive to turn a profit and could run its funds “at cost” for shareholders.

“If a statue is ever erected to honor the person who has done the most for American investors, the hands-down choice should be Jack Bogle,” Warren Buffett once said. Indeed, a statue of Bogle has stood for years on the Vanguard campus in Malvern, Pennsylvania.

After college, Bogle went to work at Wellington Management, rising through the ranks to become president in 1967. That same year, Bogle made one of his first few major missteps – a merger with an aggressive set of managers in the “Go-Go” 1960s. When the bottom fell out of the market in the early 1970s, the firm’s funds crashed, too. Bogle was fired in 1974.

While Wellington ended Bogle’s role in investment management of the firm, he was allowed to take many of the administrative and back-office functions with him to the firm he created in September 1974, Vanguard. That made it easy for Bogle to return to the subject of his senior thesis: index funds. On Aug. 31, 1976, he launched First Index Investment Trust, which later was renamed Vanguard 500 Index Fund (VFIAX).

John Bogle’s accomplishments came despite terrible health. He had at least six heart attacks, with the first at age 31. Doctors told him he wouldn’t live past age 40. In typical Bogle fashion, he fired his doctors and consulted others.

When he played squash, Bogle first instructed his opponent on how to use a defibrillator, in case Bogle had another cardiac event. In 1980, Bogle collapsed on the court and went into cardiac arrest. Fortunately, his opponent that day was a physician, who managed to save him.

In a 2014 speech, Bogle recounted an attack he had while rushing for a train. “I said to the guy who found me, ‘Look, I’m fine. This happens to me a lot. Can you just get me to the next train to Paoli?’” It may have been that brand of mental toughness (and a little denial) that enabled Bogle to live so long and accomplish so much.

In 1996, Bogle met with a dozen financial journalists, including me, at a luncheon in Manhattan. By then, Bogle was visibly a very sick man. His long fingers curled in odd directions, his face was pale, the lines on his face were deeper than ever.

“My body is broken,” he told us. It was clear that Bogle wanted badly to live and equally clear that running Vanguard gave his life meaning. Yet the reality of his illness had finally persuaded even this incredibly stubborn man to step down as CEO. No one at the luncheon thought Bogle would live very long. No one, that is, except perhaps John Bogle himself.

He was hospitalized for more than three months while he awaited a heart transplant. He received the heart of a 26-year-old man and lived more than two decades longer. He died Jan. 16 of cancer.

Bogle remained on Vanguard’s board of directors until December 1999, clashing frequently with other directors, and especially with his hand-picked successor, John Brennan. But after he left the board, he was given a small office building with a couple of assistants. He named it the Bogle Financial Markets Research Center, which still operates today.

This member of the Kiplinger 25 gained 9.5% over the past 12 months, beating 76% of its peers.
Peering Past the Pandemic