Double Down on Credit Card Payments

Question: Should I suspend my retirement-plan contributions until I’ve paid off $22,000 of debt?John, a police commander, quit using his three credit cards, which have rates ranging from 13.99% to 19.24%, and is determined to erase the debt. 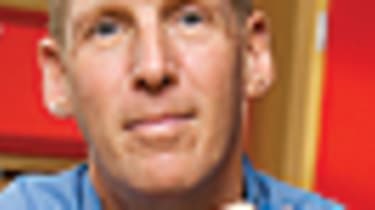 Question: Should I suspend my retirement-plan contributions until I’ve paid off $22,000 of debt?

John, a police commander, quit using his three credit cards, which have rates ranging from 13.99% to 19.24%, and is determined to erase the debt. His idea is to stop deferring $260 a month into his 403(b) public employees’ retirement-savings plan and pay it and any overtime to the card issuers instead. “I think it would be counterproductive to try to build my 403(b) when I’m paying about $300 a month in interest on the credit cards,” John reasons. But isn’t it a mistake for a 46-year-old to interrupt retirement contributions? John expects to retire in five or six years and doesn’t know how much he’ll earn in a second career or whether he’ll have access to another retirement plan.

QUIZ: Are You Saving Enough for Retirement?

As a patrol shift commander in Prince George’s County, Md., outside Washington, D.C., John could retire next year. But he plans to stay on until 2016 or 2017 to qualify for a larger pension. His pension should equal 80% of his salary during his final two years (not including overtime), which he expects to be a little over $100,000. The police pension has an inflation adjustment, but it’s subject to contract negotiations. As pensions go, his is more secure than most. But he still intends to work elsewhere because he’s raising a son, Alex, 12, and because “I can’t sit and do nothing when I retire.”

In addition to debt repayment and retirement, John has a third claim on his money: education. He’s contributing $4,000 a semester (matched by his former wife) for their daughter, Amarillis, to attend college. John also hopes to start a college fund for Alex.

Setting priorities. John’s is a classic case of a middle-class family juggling education, retirement and daily expenses. The conventional advice is to keep up your retirement contributions if your employer offers a match; otherwise, you’re throwing away free money. The county doesn’t match John’s 403(b) deferrals, so all he would lose by dropping the $260 contributions would be tax breaks on his current income and the tax-deferred earnings from the investments. Given his generous pension, continuing small contributions would not add much to John’s overall retirement income.

But an additional $260 a month on his credit card debt would make a big dent, says Bonnie Sewell, of American Capital Planning, in Reston, Va. At the rate John is paying down his debt, he’s decades away from erasing it. Sewell recommends he roughly double his current $300 payments. If John can refrain from new charges, a payment of $600 a month would wipe out the $22,000 balance (at 15% interest) in a little more than four years.

It’s best to have a disciplined plan to extinguish that revolving debt. Craig Larsen, of AHC Advisors, in St. Charles, Ill., says John should use the “snowball method.” He should make extra payments on the card with the lowest balance until it is paid off. Then he can focus on the second account and eventually the third. As John chips away, he should watch for 0% balance-transfer offers. Even though there may be upfront fees, and interest rates could shoot up after six months or a year, it’s worth a try.

From reading materials to debt, the demands on your savings during your golden years might surprise you.
Retirees, Create An Emergency Fund for Rental Property

Build a cushion to protect your income from an unforeseen crisis.
Skip to ContentSkip to Footer