6 Ways to Help the Grandkids Pay for College

Covering educational expenses is one of the best gifts you can give, if you go about it the right way. Here are six strategies. 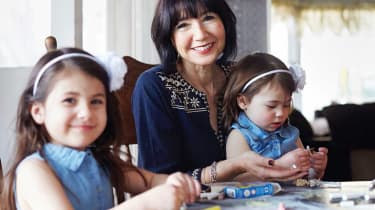 Anyone who is old enough to have grandchildren remembers when it was possible to earn enough money from summer and part-time jobs to cover college tuition. Now, unless your grandchildren create the next Snapchat or Facebook, that’s probably not going to be an option for them.

Over the past 40 years, tuition has increased at more than twice the inflation rate, straining family finances and forcing millions of young adults to take on student debt. Grandparents are eager to help. A 2014 survey by Fidelity Investments shows that more than half are contributing to a grandchild’s college education or plan to do so in the future.

But helping your grandchildren obtain a college degree is more complicated than mailing them a check on their 18th birthday. Any gifts you give may have tax implications for you (for better or for worse). And if the kids apply for financial aid, your generosity could backfire. Here’s how to help the grandkids in the most effective way.

Harriet Sukaskas, a middle-school teacher in Johnston, R.I., says her three grown children had to borrow to cover their years in college. To avoid that burden for her two granddaughters, Avery, 4, and Abby, 2, Sukaskas invested in Rhode Island’s 529 plan, CollegeBoundfund, shortly after they were born.

Sukaskas contributes through payroll deduction and adds extra payments to the accounts on holidays and other special occasions. “If they get a toy, they play with it an hour or so, and that’s about it,” she says. “I’d rather have something waiting for them when the time comes for them to attend college.”

Sponsored by 48 states and the District of Columbia, 529 savings plans provide a tax-efficient way for grandparents to help with college costs. Earnings on investments grow tax-free, and withdrawals aren’t taxed as long as the money is used for qualified expenses, including tuition, fees, and room and board. If you withdraw money for nonqualified expenses, such as a medical emergency, you’ll owe income taxes and a 10% penalty on the earnings.

In addition to tax-free growth on your investment, you could get a tax break on your contributions. Thirty-three states and the District of Columbia offer deductions or other tax bennies for contributions to a 529 plan. For example, New York residents can deduct up to $5,000 in contributions to their state’s 529 plan from their state income taxes each year (up to $10,000 for married couples). Rhode Island residents can deduct up to $500 in contributions annually, or $1,000 if they’re married. Most states require you to invest in-state to claim the deduction, but six states—Arizona, Kansas, Maine, Missouri, Montana and Pennsylvania—will give you a tax deduction for investing in any state’s 529 plan. You can invest in most state plans regardless of whether you’re a state resident, but if your state offers a tax break, you’re generally better off going with that plan (see The Best College-Savings Plans).

Unlike other education savings vehicles, 529 plans have high contribution limits: Most plans allow you to invest $300,000 or more per beneficiary. And you can contribute to the plans no matter how high your income. But you’re limited to the investments offered by the plan, and you can only change investments once a year.

Another option under the 529 umbrella is a prepaid plan. These plans let you prepay all or a portion of the cost of an in-state public college. If your grandchild decides to go to a private or out-of-state school, you can get a refund or transfer the money, though it won’t necessarily cover all of the costs. Tax benefits and penalties are the same as for 529 savings plans. Only 12 states offer prepaid plans; the Private College 529 Plan offers a comparable program for private schools (www.privatecollege529.com).

Estate planning. Contributions to a 529 plan will reduce the size of your estate, a benefit you shouldn’t ignore. While up to $5.43 million of assets is exempt from federal estate taxes, 13 states and the District of Columbia have lower thresholds. In New Jersey, estates worth more than $675,000 are subject to estate taxes.

You can contribute up to $14,000 a year, or $28,000 if you’re married, to a 529 plan without filing a gift tax return. Better yet, you can stash up to five years’ worth of annual gift tax exclusions, or up to $140,000 for a married couple, in one year, says Jim Parks, a certified financial planner in Ridgewood, N.J. The money will no longer be included in your estate, but you’ll maintain control over the account, he says. If your grandchild doesn’t go to college, you can switch beneficiaries, or use the money yourself and pay the penalty and taxes on the earnings.

Impact on financial aid. Money held in a grandparent’s 529 plan isn’t counted as an asset on the Free Application for Federal Student Aid (FAFSA), which is used to determine a student’s eligibility for financial aid. However, when you take withdrawals to pay for your grandchild’s college expenses, those distributions are treated as the child’s income on the following year’s FAFSA. The income will reduce financial aid on a dollar-for-dollar basis, says Deborah Fox, founder of Fox College Funding, in San Diego.

To get around this problem, you could wait to withdraw money from the 529 plan until your grandchild is a college junior and has filed the FAFSA for the last time, in which case it won’t affect her eligibility for financial aid in her senior year. Or, if your grandchild needs the money earlier, consider switching ownership to the child’s parents. Only up to 5.64% of a parent-owned 529 plan’s value is counted as an asset in the FAFSA formula, says Joseph Hurley, founder of Savingforcollege.com. Distributions from the parent-owned account won’t be counted as income, Hurley says. Not every plan allows you to transfer accounts; check your state’s rules for transferring accounts at www.savingforcollege.com.

Another option is to make contributions to the parent’s 529 plan. The downside is that you give up control of the account, but some states will still allow you to deduct your contributions, Hurley says.

2. Contribute to a Coverdell

Like money invested in 529 plans, funds invested in a Coverdell education savings account grow tax-deferred. Withdrawals aren’t taxed as long as the money is used for qualified educational expenses. You can set one up at a bank or brokerage firm, giving you more investment choices than you have with a 529 plan. The maximum you can contribute, though, is $2,000 a year. To contribute, you must have a modified adjusted gross income of less than $110,000 if you’re single or $220,000 if you’re married and file jointly.

You don’t maintain the same control over a Coverdell account as you do with a 529 plan. Most Coverdell account agreements require that the parent or guardian be named as the individual responsible for the account. That means you wouldn’t be able to transfer the money to another beneficiary or use it for yourself.

You can contribute to an existing Coverdell as long as the total contributions per beneficiary don’t exceed $2,000 a year. If the account is owned by the parent, the impact on financial aid is minimal. If it’s owned by the grandparent, distributions are treated as the child’s income, potentially reducing financial aid.

3. Pay the bill yourself

Another way to avoid estate taxes is to pay your grandchild’s tuition directly. Tuition payments aren’t considered taxable gifts, so you don’t have to file a gift tax return, even if the amount exceeds the annual limit. You must make the payment directly to the college (not the parents or grandchild), and the exemption only covers tuition. Payments for other costs, such as room and board, are subject to gift tax limits.

Direct gifts will reduce or eliminate your grandchild’s eligibility for need-based financial aid. For that reason, consider this option only if you’re sure your grandchild won’t qualify for aid, or wait until the last FAFSA has been filed to make the payment.

With these accounts, known as UGMAs (for the Uniform Gifts to Minors Act) and UTMAs (for the Uniform Transfers to Minors Act), you put money or other assets in trust for a minor child. As trustee, you manage the account until the child reaches the age of majority (usually 18 or 21, depending on the state). The downside is that once your grandchild reaches majority, he or she can use the money for any purpose.

In addition, the account is considered the child’s asset, which will significantly reduce eligibility for financial aid. Full-time students younger than age 24 pay no tax on the first $1,000 of unearned income, and they pay the child’s tax rate on the next $1,000. Earnings above $2,000 are taxed at the trustee’s marginal rate.

Cosigning a private student loan will help your grandchild get a lower interest rate, but you’re responsible for the debt if your grandchild defaults or falls behind. Debt collectors could sue you to collect the amount due, jeopardizing your retirement savings.

A better option is to encourage your grandchild to stick with federal loans, which are easy to get and have more-flexible repayment terms than private loans, then help repay the loans after graduation. This strategy won’t affect the family’s eligibility for financial aid. Loan payments on behalf of someone else are considered taxable gifts, so limit your repayments to $14,000 a year (or $28,000 for a married couple).

6. Kick in from your Roth IRA

Tapping your Roth is an option if you’ve already funded your retirement. As long as you’re at least 59½ and have owned the Roth for at least five years, you can withdraw the earnings without paying taxes or penalties (you can withdraw contributions tax- and penalty-free at any time). If you give the money directly to the grandchild’s parents after they’ve filed the FAFSA, it will have no impact on financial aid, as long as they use the money to pay the tuition bill before filing the FAFSA for the following year. (This strategy would work with any gift you provide, not just withdrawals from a Roth.)

You can’t save as much in a Roth as you can in a 529 plan. In 2015, the maximum amount you can invest in a Roth is $6,500 if you’re 50 or older. There are also income limits: You can’t contribute to a Roth if your 2015 adjusted gross income is $131,000 or greater, or $193,000 or greater if you’re married. But as a college savings vehicle, a Roth offers flexibility. You won’t be penalized for using the money for things other than qualified educational expenses if you end up needing it yourself. You also have an unlimited range of investment options.

For many older adults, having an alternative mode of transportation may be the difference between independence and social isolation.
7 Ways the Pandemic Will Change College Forever

Colleges and universities face steep budget cuts, enrollment challenges and new types of competition as a result of COVID-19. We cover the changes you…
The Answers to More RMD Questions

Planning to buy a home in a different state? Property taxes should be examined closely, because they can be quite a bit higher than income taxes in ma…
Skip to ContentSkip to Footer