We're Going Back to the Moon

And then Mars. It's a new space race with China. 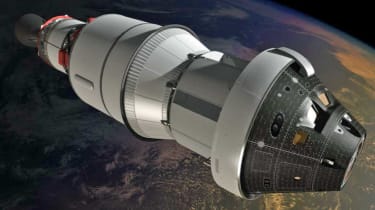 A new space race looms on the horizon.

The goal: Putting men on the moon again (and maybe women this time, too), echoing the expensive and exhilarating missions that led to Neil Armstrong’s historic step onto the lunar surface in 1969.

A return to the moon seems likely sometime late in the 2020s – more than 50 years after the first trip there. It would be followed, sometime in the 2030s, by a manned flight to Mars, using a lunar base as a departure point.

A U.S.-led team will reach the moon first, just as Americans outpaced the Soviets last time. But China will be nipping at NASA’s heels, poised to win the new race if budget cuts or problems – either political or scientific – disrupt America’s timetable.

So why is a costly return to space under consideration even as many members of Congress are looking to cut federal spending and trim the budget deficit? One factor to weigh is that NASA’s budget won’t be much different than it is now, about $18 billion a year. Private companies will kick in billions more, as will countries eager to partner with the U.S.

Another consideration: There is vast potential for scientific gains in health care, technology and telecommunications. Medical experiments, a boon for universities and private companies that partner with NASA, will help astronauts deal with the effects of prolonged weightlessness. Here on Earth, those studies may lead to advances in treating bone and muscle problems in older people.

And there’s a good chance that space missions will lead to the creation of new products that will find uses in daily life. The first era of space exploration brought a number of advances that are now taken for granted: Memory foam for mattresses and pillows. Cordless power tools. Scratch-resistant eyeglass lenses. Even freeze-dried food.

The renewed interest in space travel will also create a string of business opportunities for companies of all sizes. At one end of the scale, SpaceX is getting $1.6 billion to develop and fly rockets. The company, just one of the joint ventures pushed by NASA’s brass, has had a mixed track record so far.

Boeing, Lockheed Martin, Orbital ATK and others will work on lucrative contracts for space vehicles to carry humans and cargo, and will provide other major components and gear. While those giant firms will land much of the space program’s main work, the contracts will require countless subcontractors to provide parts and perform some tasks.

Nearly every state will benefit to a degree, though the bulk of the work will be in states with existing space industry ties: Florida and Texas, of course, but also Alabama, California, Maryland and Virginia.