What the Next Air Force One Will Be Like

It’ll come with plenty of new bells and whistles, but -- no -- no escape pod. 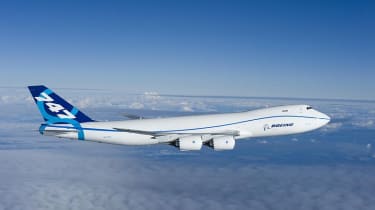 A future president will get a new Air Force One early in the next decade.

With the current presidential jet nearing the end of its service life, Boeing is working on two state-of-the-art replacements – a primary plane and a backup -- that will be ready for use in 2021 or so.

Slideshow: Air Force One Over the Years

The new modified 747-800 jets will feature more-energy-efficient jet engines than the 747-200s now in use. Today’s Air Force One lost some distance capacity when top secret electronics gear was added after the 9/11 terrorist attacks. The four engines on the next generation of Air Force Ones will provide enough thrust to make up for the additional weight. The Air Force colonels who fly Air Force One pay a lot of attention to the total weight of the plane, constantly having to calculate how far it can fly in case of a sudden change in flight plans.

Among other features: A mobile command center, a war room, a fully outfitted surgical operating room plus equipment for defending the aircraft in case of a missile attack. Also, a stealthier airplane outer skin that will make the planes more difficult to spot, and onboard electronics that can withstand an electromagnetic pulse.

One thing the plane will not have: an escape pod like the one featured in the movie Air Force One, starring Harrison Ford. It’s just not feasible.

Each of the two new tricked-out Boeing 747-800s will cost the government substantially more than the $357-million sticker price on the commercial version -- and not just because of inflation between now and the first flight. The White House has already asked Congress to allocate $1.14 billion for research and development of the next-generation Air Force One.

The current presidential jets, designed by President Ronald Reagan and first used by his successor, George H.W. Bush, will reach the end of their allotted 30-year life span in 2017. But they’ll be kept in use until the replacements are ready.

Boeing will remain the sole builder of Air Force One. The Chicago-based firm has been building presidential jets since its first Air Force One, a 707-320B, debuted in 1962 during the administration of President John F. Kennedy.

This time around, the European aircraft consortium Airbus considered putting in a bid to convert its massive double-decker A380 jet into the next-generation Air Force One, but ultimately did not do so, making Boeing the sole bidder.

The Air Force One contract may help keep an assembly line open at Boeing’s Seattle-area plant, where the 747-800 is built. Contracts for commercial 747-800s and for the four-engine C-17 military aircraft, also built in Seattle, are way down, so the new Air Force One contract is likely to save hundreds of jobs.

Boeing would have preferred to offer up as the next Air Force One its newer 787 Dreamliner model, which it plans to build in Seattle and South Carolina. But with that jet plagued with a series of glitches, from poor flow of oxygen to the cockpit to lithium-ion batteries catching on fire, the Secret Service expressed concerns about its reliability.