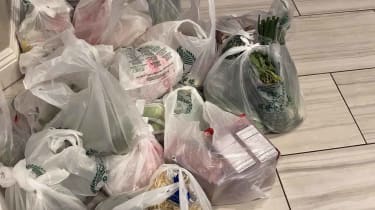 Plastic store bags are making a comeback, thanks to the coronavirus pandemic and a push by the plastics industry.

An increasing number of state and local governments have instituted temporary bans on customers bringing their own reusable bags to grocery stores and other retail outlets. The thinking: Such bags potentially could be contaminated with the coronavirus. Illinois, New Hampshire, Massachusetts, San Francisco and other locales across the country have instituted bans on reusable bags. And statewide bans on single-use plastic bags slated to go into effect this year in New York and Maine have been put on hold. More localities may follow suit.

Citing environmental concerns, state and local governments for years have been trying to wean the public from its plastic bag habit, either by requiring customers to pay a few cents to purchase single-use bags at checkout or instituting outright bans on the bags. Such moves have become a growing threat to the plastics industry — and the fight over bags has been fought at culture-war intensity.

But since the pandemic took hold, the industry has been lobbying the federal government to proclaim that plastic bags are more hygienic.

The science around reusable bags and their potential to spread disease is contentious. An often-quoted 2011 study by researchers at the Universities of Arizona and Loma Linda found that reusable plastic bags can contain bacteria. But the study was funded in part by the American Chemistry Council, which represents major plastics and chemicals manufacturers. The study recommends that shoppers simply wash their reusable bags, not necessarily replace them with plastic bags.

Some retail chains have instituted their own restrictions on plastic bags. Target has prohibited reusable bags and has asked customers who bring their own bags to their stores to bag their own items at checkout. The retailer has temporarily waived any local fees on distributing single-use bags. And Midwestern supermarket chain Hy-Vee is temporarily not accepting reusable bags.