Federal Deficit in the Danger Zone

As federal spending continues to rise, a crushing mountain of debt looms.

Time is running out for attacking the deficit. The danger, once distant, is now close. Soaring deficits are jacking up the national debt, resulting in higher interest rates and raising the odds of an even weaker dollar, which would stunt economic growth and lower Americans’ future standard of living.

Spending is out of control. For years it has averaged about 20% of GDP. This year, it’ll be about 25%. Some of that is due to spending on war in the Middle East as well as efforts to cushion the effects of the recession through higher unemployment benefits, aid to banks and state governments, spending on roads and highways, and more. Plus, tax receipts diminished as the economy shrank.

But even after the economy fully recovers, outlays won’t ebb. The growing ranks of retirees mean that Medicare and Medicaid costs will keep soaring, even if health care reform successfully curbs increases in the cost of care -- an iffy proposition at best.

Such entitlement programs -- those that lawmakers don’t control on a year-to-year basis but that run on a sort of autopilot -- account for 54% of federal spending. And they’ve climbed 6.4% on average a year since 2000. When it comes to spending that it can control annually, Congress has shown little restraint. Discretionary spending, which includes defense and an array of domestic programs from national parks to the FBI, has risen over the past decade at an average of 7.5% a year. 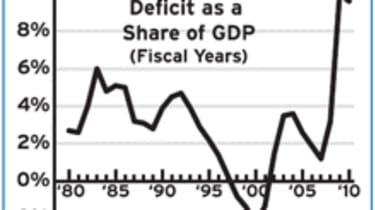 The result is an annual deficit that in fiscal 2009 was equal to nearly 10% of GDP, the largest since it hit 21.5% in 1945 at the end of World War II. What’s worse is that a mountain of debt will continue to pile up even if the politicians in Washington manage to keep a rein on spending and trim the yearly deficit. In fiscal 2009, federal debt held by the public jumped by a third, to $7.8 trillion. At the end of fiscal 2008, debt held by the public measured 41% of GDP. By 2014, it’ll equal a whopping two-thirds of GDP.

The interest payments on the debt will be staggering. They could soar to as much as $800 billion a year by the end of this decade, gobbling up 16% of the total budget. Indeed, servicing the debt may become the single biggest item in the federal budget, surpassing Medicare, defense and Social Security.

That will raise the cost of borrowing for everyone -- households and businesses alike. And it threatens to derail the U.S. economic engine. A jump in the debt from 40% of GDP to 60% would boost the rate on Treasury bonds by a full percentage point. Other interest rates, such as those for mortgages and corporate bonds, would follow. And if the U.S. loses its top credit rating -- until recently, an unimaginable event -- interest rates will increase even more. China, Saudi Arabia and other cash-rich nations would insist on higher returns to keep buying U.S. Treasuries at auctions.

Foreign nations, which own about half of the $7.8 trillion public debt, don’t need to sell to make waves. They could simply slow their rate of buying. That might tempt the Federal Reserve to buy debt in order to stave off a rise in interest rates. But that’s no way out. “Countries have tried that and seen double-digit inflation,” says Rudy Penner, former director of the Congressional Budget Office, now with the Urban Institute. “Even the tiniest probability of that has to be avoided.”

There are no easy fixes. Diane Swonk, chief economist with Mesirow Financial, says, “We’re going to have to cut overall spending and raise overall taxes.” In fact, solving the problem will take unparalleled restraint, and determination by elected officials of all stripes.