You've probably heard that a typical wedding gift ranges from $50 to $150.

You've probably heard that a typical wedding gift ranges from $50 to $150. That can be a steep price to pay if you're just starting out or have numerous gifts to buy this wedding season. So here are ten ideas for gifts that are less than $50. The best part: They won't look cheap and are sure to make an good impression on the bride and groom.

Buy them a bottle of champagne to drink on their first anniversary or a bottle of wine that'll be at its best by their fifth or tenth anniversary. Enlist the help of a specialist at your local wine shop to help you select a bottle that will peak at the right time. Or check out Wine.com for advice.

Every newlywed will be inundated with kitchenware, bedding and even bath goods. What they may forget is how to relax now that they have new grownup gear. Bring out the kid in them with a sampling of their favorite board games. Or sign them up for a Netflix subscription for all those nights in -- now that they are out of the dating game.

A wedding scrapbook is a great gift from an individual or a group. Collect things leading up to the wedding -- a bridal show ticket, your invitation, notes from friends or a matchbook from the bachelor's/bachelorette's party -- and take a lot of pictures before and during the ceremony. Combine everything in a nice book with plenty of space for the couple to add their own mementos.

Let's face it: Some of us just aren't crafty enough to make a scrapbook that's gift-worthy. So put away the scissors and glue, get out your computer and create a DVD slide show featuring photos of the couple. Include shots from their dating years and take candid photos at the wedding. For background music, add in their favorite songs. They'll love watching it and showing it to friends and family again and again.

A Christmas ornament or holiday decoration to start a collection for their first holiday season together adds to the memories of a year of firsts. Several companies, such as Bronner's Christmas Wonderland, offer ornaments that are engraved or handpainted with the newlyweds' names and the wedding date. Most are $20 or less, so this is an inexpensive way to give a personalized gift.

They'll want to have pictures of themselves together on their honeymoon, but everyone hates asking strangers for endless shots. Solution: a travel tripod. Try the Gorillapod for just $22 at www.thinkgeek.com. It screws into the bottom of any digicam, and its leg wrap around any surface nearby.

Now that your newlywed friend is cooking for two, she (or he) will appreciate having plenty of recipes for tasty dishes to impress the spouse. Plus, if the couple are young and just starting out in their careers, they'll save a lot of money by dining in rather than eating out. So gather your favorite recipes -- and your friends' and family members' -- to create your own cookbook. You might be able to talk the chefs at the couple's favorite restaurants into offering a couple of their recipes, too. And consider adding anecdotes to the pages: stories about your friendship, tales of the couple's courtship or what makes the dishes in the cookbook special.

If you know what the couple's interests are, this is a great way to personalize a gift. For example, if they are movie buffs, fill a basket with some of their favorite flicks, popcorn and other snacks. Or you could whip up something for romantic evenings (or mornings) at home, such as a bath/spa basket or breakfast-in-bed kit.

A monogram can be an inexpensive way to add a touch of class to an ordinary gift. Several catalog companies, such as Lands' End and Pottery Barn, offer monogramming on linens and towels. The Company Store has free monogramming on selected items, such as its towels. The newlyweds can pull them out to impress guests. Or you could get the couple a his-and-her set with their names on them for everyday use.

FOOD FOR THE PANTRY

The couple probably will receive plenty of mixing bowls, blenders and other kitchenware. Help them put those items to use by filling a box with spices, pasta, rice, canned goods and other baking basics. It will be unexpected, make a big impact and definitely come in handy as the couple is just starting out.

From laptops to loudspeakers to, yes, shoes. Check out the latest gee-whiz to make an impression during gift-giving season.
How Holiday Shopping Happens in a Pandemic 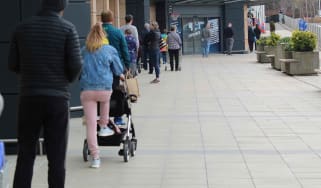 How Holiday Shopping Happens in a Pandemic

Black Friday and Cyber Monday this year will be like never before. DealNews analyst Julie Ramhold joins us to talk about how to navigate sale season. …