How Do Your Tax Deductions Stack Up?

Do you know how you compare with your fellow taxpayers when it comes to the deductions you take? We have the answer.

Wonder how your itemized deductions compare with those of other filers? Check the averages in this table. It compares several key write-offs claimed by filers at various income levels, using IRS preliminary data from 2011 returns 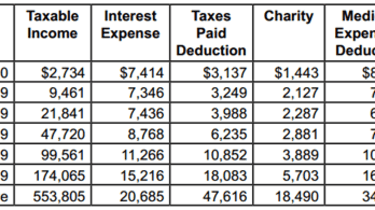 Some things to keep in mind about the data: The Total Itemized Deductions column of the table includes miscellaneous itemized deductions plus any casualty and theft losses. The averages for taxes paid include taxpayers in states without an income tax who elect to deduct state sales tax, so the amount in the table may seem a bit low. The averages also include personal property taxes and real estate taxes.

And only medical expenses over 7.5% of AGI were deductible, so relatively few filers ended up taking the write-off. The figures above are the averages for those taxpayers.

You won’t automatically be audited for having above-average deductions. The IRS knows that people living in states with high individual income tax rates claim larger state tax deductions than folks in states with low tax rates or no tax. And the agency matches mortgage interest deductions with 1098 forms from lenders.

But if your deductions are disproportionately large when compared with your income, your audit risk can go up because that’s a key factor in IRS’ return selection formula.

Watch out: These things can increase the chances that the IRS will give your tax return a closer look.
10 Tax Breaks for the Middle Class

Tax breaks aren't just for the rich. There are plenty of them that are only available to middle- and low-income Americans.
What to Do If You Get a Stimulus Check for a Deceased Person

The IRS sent more than 1 million stimulus checks to dead people. If you received one for a family member who passed away, there are certain steps you …
Skip to ContentSkip to Footer