States are searching for ways to close yawning deficits. But there’s good news: Estate taxes are on their death bed. 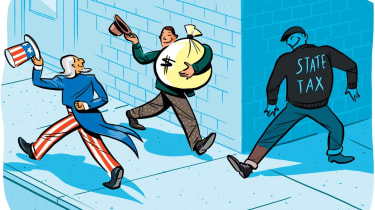 For all the talk about tax reform, unless your personal situation changed last year, you won’t see much difference in your 2017 federal tax bill. But your state tax bill could be another story. Faced with yawning budget deficits and deteriorating infrastructure, several states raised taxes on everything from income to gas in 2017, and more increases could be in the offing for 2018.

Other fiscally challenged states considered income tax hikes in 2017, and those debates are likely to continue this year. In Delaware, Democratic lawmakers proposed raising taxes on residents who earned more than $60,000 a year and eliminating itemized deductions. Those proposals were defeated, but the legislature voted to raise taxes on real estate transfers, cigarettes and alcohol.

Alaska, long a low-tax haven, is facing a $3 billion budget deficit as a result of falling oil prices. Gov. Bill Walker has proposed an income or state sales tax to help close the gap (Alaska has neither). Other states that derive most of their tax revenue from energy companies may need to consider similar measures if energy prices remain low, says Scott Drenkard, director of state projects for the Tax Foundation.Even if you live in a state that’s not facing a budget shortfall, there’s a good chance you’re paying more at the pump than you were a year ago. Indiana, South Carolina, Tennessee and West Virginia raised state gas taxes effective July 1, 2017. In May, Montana adopted a bill that will phase in higher gas taxes over five years.

But 2017 also illustrated the challenges facing lawmakers who propose tax hikes. Maine lawmakers rolled back a 3% tax surcharge on income exceeding $200,000 that had been narrowly approved by voters in November 2016.

The end of estate taxes? One state tax that is fading into the sunset is the estate tax, and Congress’s plan to eliminate the federal estate tax could hasten its demise. New Jersey’s estate tax will disappear on January 1. Thirteen other states and the District of Columbia continue to impose an estate tax, but a growing number are increasing the amount of assets that are exempt. In New York, for example, the exemption rose to $5.25 million from $4.19 million on April 1, 2017; beginning in 2019, it will match the federal exemption, which is currently $5.6 million.

But states could find it much more difficult to impose an estate tax if the federal estate tax dies. States rely on the feds to enforce the tax, Drenkard says. They may decide it’s not worth hiring administrators to collect a tax that typically brings in less than 1% of overall revenue, he says.

Others aren’t so sure. State and local governments took in about $5 billion from estate, inheritance and gift taxes in 2015, according to the Tax Policy Center at the Urban Institute. Though that’s nowhere near what states collect from other taxes, “it’s real money,” says Richard Auxier, research associate for the Tax Policy Center. “If you get rid of it, you have to find a replacement.”

On November 3, voters in 17 states weighed in on a variety of proposed changes impacting taxes on everything from property to pot.
11 Year-End Moves to Lower Your 2020 Tax Bill