The Best of the New Camcorders

The latest models can shoot up to 40 hours of video, and some even record in high definition. Here are four of our favorites.

Today's camcorders have the memory of an elephant and the eye of an eagle -- and they can even capture the colors of a cockatiel. But as they've grown more sophisticated, the increasing number of features and functions makes it tough to choose one from the menagerie.

One big variable confronting buyers is the type of memory. Most camcorders now use hard disks, flash-memory cards and DVDs, rather than digital tapes, to store images. The good news is that, compared with videotape, these media make it easier to transfer images to your computer and to edit them there.

You can watch your memories unfold on your TV screen; audio-video cables are included with all these models. Most camcorders also take still photos, and the newest camcorders even record in high definition.

Choosing a camcorder is like buying a car: The test drive is essential. Hold it in your hand. Is it lightweight and comfortable? Are the on/off, record/play and zoom controls at your fingertips? Is the LCD crisp and colorful, and its on-screen menus comprehensible? And if you plan to take still photos with the camcorder, is it a 5-megapixel model?

We've chosen four of our favorites, and any one is a natural selection depending on the traits that are most important to you. 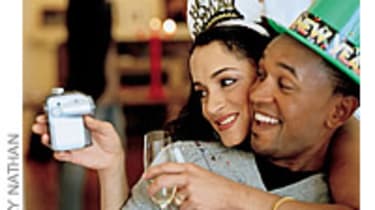 If you want small (and we mean really small for a camcorder), go with the Panasonic SDR-S150 ($1,000). The pint-size S150 is no bigger than your average point-and-shoot digital camera. That's largely because it stores video on a tiny SD memory card, which is about the size of a plump postage stamp. Despite this miniaturization, the S150 is user-friendly, with a surprisingly large 2.8-inch-wide LCD screen, easy-to-learn controls and a 10X optical zoom lens.

At just over half a pound, the S150 is a featherweight (using many camcorders makes you feel as if you're wielding a brick). Its images are exceptionally easy to transfer to a computer: Pop out the memory card and insert it into a memory-card reader, which comes with most laptops and many desktop PCs.

The drawback? Limited recording times. The 2-gigabyte card included with the S150 stores less than two hours of video in long-play mode and a measly 25 minutes using the XP (high-quality) setting. You can double the recording time by upgrading to a 4GB SDHC memory card, which costs about $220.

For longer recording times, a camcorder with a built-in hard drive is the way to go. The JVC Everio GZ-MG505 ($1,300) has a 30GB internal disk that stores seven to 37 hours of video, depending on quality.

We like this camera for several reasons. First, its controls are intuitive. A toggle switch to the left of the 2.7-inch LCD, for instance, makes it easy to navigate among video clips.

Like the S150, the Everio captures vivid color. Both are 3CCD cameras, which means they process each primary color -- red, green and blue -- separately. Combine that with a 10X optical zoom (8X for photos), 5-megapixel still images and surprisingly short shutter lag, and you've got a dandy camcorder-digital camera combo that records high-quality videos and takes sharp photos. 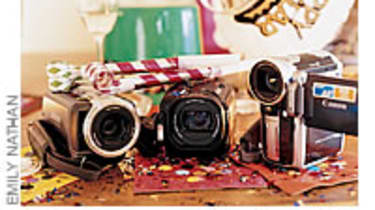 One small gripe: We wish the Everio came with an automatic lens cover. The flimsy one that's included dangles by a string and bangs around when you're shooting.

Need even more storage? The Sony DCR-SR80 ($800) has a 60GB hard drive that holds 14 to 40 hours of video. The cylindrical SR80 sits comfortably in your right hand (sorry, southpaws). Its touch-screen controls are a breeze to navigate, although the on-screen buttons on the 2.7-inch-wide LCD may be too small for large, stubby fingers to push easily.

We were impressed with the Sony's ability to shoot clear, crisp video in low lighting (in that regard, we found it superior to both the Panasonic and JVC models). The Sony's 12X optical zoom is very good, as is its image-transfer software. And compared with other cameras that have similar features, it's reasonably priced. But if you're looking for a replacement for your digital camera as well as for a video camera, go with the Everio. We found that it took sharper, more-colorful photos.

With high-definition television all the rage, the arrival of HD camcorders is no surprise. One of the first is the Canon HV10 ($1,300), a 1-pound handheld camera that records video in the 1080i HD format. To appreciate its stunning resolution, you'll need an HDTV or an HD monitor. On a standard television, the HV10 automatically downgrades its video, and the quality is, well, pretty average.

Ah, but the glories of high-def video on an HDTV. Details you've never noticed in other home videos jump out at you: Beads of sweat on your kid's face during a soccer match, sunlight dancing off ripples in a swimming pool, the crisp, jagged edges of an autumn leaf. The HV10's auto-focus setting will turn even an amateur into a decent camera jockey. Don't expect the professional-caliber video you see on an HDTV broadcast, but you'll still be impressed.

The HV10 has its quirks. For starters, it records on MiniDV tape, an old-school medium. Unlike a hard disk or a memory card, digital tape requires slow rewinding and fast-forwarding, making it difficult to jump to a particular video clip. Plus, it only records for 80 minutes, max. The Canon's zoom and photo buttons are positioned too low on the camera's right side, making them tricky to reach if you have long fingers. But this is a solid camcorder, HD or not.

Our dream camcorder? It weighs half a pound, shoots 40 hours of HD video on a memory card and slides into a shirt pocket. Don't laugh. At the rate things are changing, we may have to wait just a week or two.