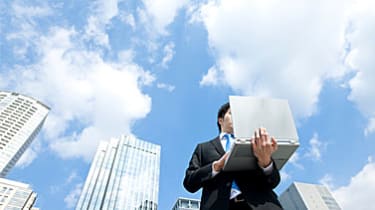 The Chromebook reflects how we use laptops today. We open a browser to read e-mail, check news sites, watch videos, post Facebook updates and shop at online retailers. So, a few years ago, Google set out to ditch the bloated operating software that takes minutes to boot up (that’s you, Windows and Mac) and reinvent the personal computer as a Web-only device that stores most of your files online.

How it works. Chromebook is built specifically to run Google’s free Web-based apps, including Gmail, Google Drive (word-processing, spreadsheet and other office applications), Calendar and Picasa (for managing photos). It starts up in seconds and has a familiar, desktop-style interface. A row of icons in the lower left corner of the screen provides access to Google’s most popular offerings, including YouTube.

You can save and retrieve files on a Chromebook, even if you’re not connected to the Web, but given the Web-centric focus, it’s no surprise that the Chromebook is designed for cloud storage. You get 100 gigabytes of free space on Google Drive for two years, after which you can still access your data, but you’ll have to buy storage to save new files; plans start at $2.50 a month for 25GB.

If you do not have a re­liable Internet connection, a Chromebook isn’t for you. You can work offline in Google Docs, but you’ll have to wait until you’re back online to sync changes with the cloud version. And you can’t physically connect a Chromebook to your printer, but rather must route print jobs through Google’s free Cloud Print service.

Hard-drive bargain. So far, three manufacturers—Acer, Samsung and Hewlett-Packard—have gotten on the bandwagon. The cheapest model, the Acer C7 ($200), is an inch thick, has an 11.6-inch display and weighs 3 pounds—about half the weight of a conventional laptop. For storage, it uses a 320GB hard disk rather than a solid-state drive or flash memory, making it noisier than flash-memory-based Chromebooks.

The C7’s 1366-by-768-pixel display is surprisingly sharp for a bargain laptop, and its Intel Celeron processor delivers enough horsepower to run Web-based video clips smoothly. The keyboard is spacious enough for touch typists, although its keys feel a bit mushy. Battery life is rated at 4 hours. Acer recently introduced an improved model with about 6 hours of battery life for $280.

Air wannabe. The Samsung Chromebook ($250) resembles Apple’s $1,000 MacBook Air—silvery, sleek and slim—but take a closer look and you’ll notice the cheap plastic case. Its 16GB solid-state drive may sound measly, but the whole idea is to save most of your files in Google Drive. And because there’s no spinning hard drive or fan, Samsung’s Chromebook is pleasantly quiet. Like the Acer C7, it has an 11.6-inch, 1366-by-768-pixel display.

On the plus side, the Samsung keyboard has generously spaced keys that spring back when you type. Weighing just 2.42 pounds, the Samsung Chromebook is easy to carry. Battery life is rated at 6.5 hours.

The big picture. If an 11.6-inch laptop is too small for you, consider the 14-inch HP Pavilion 14-c010us Chromebook ($330), a full-size model that doesn’t compromise on keyboard and screen size. The HP has a 16GB solid-state drive and weighs nearly 4 pounds; battery life is rated at a little over 4 hours.