If you take all that retirement money at once, you could shortchange yourself in the long run. 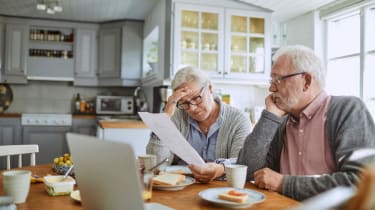 If your pension plan offers you a lump-sum payout, should you take the money and run?

Because of a recent IRS policy change, more retirees are likely to face that question in the near future. In March, the IRS opened the door for defined-benefit plans to offer lump-sum payouts to retirees who are currently receiving pension payments. That’s a reversal of a 2015 IRS announcement signaling its intent to prohibit those retiree lump-sum offers.

Although the IRS says it will “continue to study the issue,” the recent notice is widely seen as a green light for pension plan sponsors to dangle tempting pots of cash in front of retirees. And that alarms pension participant advocates, who say that people accepting lump sums often get shortchanged. The policy shift is “a windfall to companies and a loss to retirees,” says Karen Friedman, executive vice president of the Pension Rights Center.

The choice between a pension annuity and a lump sum is a high-stakes—and generally irrevocable—decision. In some circumstances, a lump sum may make sense, depending on your life expectancy and other assets. But if you opt for the lump sum, you give up guaranteed income that could have continued for your life and your spouse’s life. You take on the risk and expense of investing the money yourself and raise the odds that you could fall prey to conflicted investment advice or financial fraud. If you change your mind and use the lump sum to buy an individual annuity, the monthly payout may be much lower than the pension payment.

We’ve seen this movie before. Between 2012 and 2015, a number of large employers, relying on IRS private letter rulings, offered pension lump sums to retirees who were already receiving benefits. The 2015 IRS notice effectively put an end to those offers, although formal regulations to prohibit the practice were never issued. Meanwhile, companies have continued making lump-sum offers to former employees who have qualified for a pension but not yet started receiving their benefit. That practice was unaffected by the 2015 IRS announcement and this year’s about-face, and it has “continued unabated,” says Rick Jones, senior partner in the retirement solutions group at Aon.

Lump-sum offers are just one sign of employers’ growing efforts to shed their pension plan liabilities. Many employers have also purchased group annuity contracts from insurance companies, transferring some or all of their pension obligations to the insurer.

If you’re offered a lump sum, you’ll need to think seriously about your life expectancy and the value of your lifetime pension benefits and other guaranteed income streams, among other issues. Be aware that employers don’t always help plan participants make an informed decision. A 2015 study by the U.S. Government Accountability Office found that lump-sum information packets provided by plan sponsors often lacked critical information, such as how the lump-sum value compared with the lifetime pension benefits.

For help evaluating a lump-sum offer, consider consulting a fiduciary adviser who is committed to acting in your best interest. The adviser can calculate the present value of your future pension benefits, using various assumptions about your life span and interest rates, and compare that against the lump sum. That’s the process that Eve Kaplan, a fee-only planner in Berkeley Heights, N.J., follows with clients facing this decision—and generally, the lifetime pension payouts turn out to be the better deal, she says.

Another way to size up the lump sum: Use an online tool such as immediateannuities.com to calculate the monthly income you would receive if you invested the lump sum in an annuity. You may find that monthly income is much lower than your pension benefit, in part because insurers in the retail market use different interest rates and mortality assumptions than those used by plan sponsors. Individual annuities are also pricier for women than for men, based on women’s longer average life expectancy, whereas pension plans are not allowed to make gender-based adjustments. A typical 65-year-old man would lose 17% of his monthly retirement income if he accepted a lump sum and used it to purchase an annuity outside the plan, according to the GAO study, while a 65-year-old woman would lose 24%.

If you’re thinking of investing the lump sum in the market, weigh the investment fees that will eat into your returns as well as your potential exposure to conflicted advice. Remember that advisers charging an asset-based fee have an incentive to recommend you take the lump sum over a pension: the larger your account balance, the bigger their paycheck.

Factor your spouse and other potential heirs into the decision. A pension can provide steady guaranteed income until the second spouse dies, whereas a lump sum offers no guarantee that there will be anything left for the surviving spouse. Also consider the possibility that you or your spouse could face cognitive decline in your later years, making it more difficult to manage a lump sum. However, if you have a large nest egg and your primary goal is to leave something for your children or other heirs, a lump sum may be the better choice.

Don’t give up a pension based on fear of the employer going bust. If your former employer is paying your benefits and that company goes bankrupt, the Pension Benefit Guaranty Corporation is likely to take over the payments. There are limits on the benefits that PBGC can pay—for a 65-year-old with a single life annuity, the monthly maximum is about $5,600 in 2019. But most retirees receive the same level of income when the PBGC takes over a plan. If a private insurer pays your pension and that company fails, a state guaranty association will guarantee your benefit, up to certain limits. Find a link to your state guaranty association at nolhga.com.

No matter what payout option you choose, review your most recent pension statement to make sure that your vesting status and your benefit calculation are correct. If you need help resolving benefit calculation errors or other pension issues, contact a U.S. Administration on Aging pension counseling program. Go to pensionhelp.org to find a program in your area.

In the wake of COVID-wracked nursing homes, increasingly more people are looking at options to age in place with long-term care insurance.
Skip to ContentSkip to Footer