Out-of-pocket expenses for prescriptions can do serious damage to your retirement income. But there are options.

When his seasonal allergies turned into chronic asthma, Harry Schaffner says he realized that he would face out-of-pocket costs of several thousand dollars per year, even with Medicare. That was going to hurt. A retired trial lawyer from La Quinta, Calif., Schaffner spent much of his retirement savings caring for his mother, who died at age 95. His wife, a breast cancer survivor, requires an estrogen-blocker medicine that costs another $150 monthly. All told, Medicare premiums and other health-related expenses have reduced Schaffner’s monthly Social Security benefit by $700.

Schaffner, 75, decided to look for help. After searching the Internet, he came across the Patient Access Network Foundation, a charity that helps cover out-of-pocket drug costs. Schaffner applied for help and received a $4,500 annual grant, which goes toward co-pays and an inhaler that costs $230 monthly and isn’t covered by Medicare.

For many older adults, out-of-pocket prescription-drug co-payments and other medical expenses can come as a shock. In their working years, employer plans may have covered prescriptions entirely or required only modest co-pays and deductibles. Seniors often worry about long-term-care expenses eating into their wealth in retirement, but they don’t realize how high their out-of-pocket medical costs can run, says Matthew Rutledge, a research economist with the Center for Retirement Research at Boston College.

A recent CRR study found that retirees pay an average of $4,300 annually out of pocket for Medicare premiums, co-pays and deductibles. The costs eat up about a third of the average Social Security benefit, the study says.

Medicare beneficiaries like Schaffner generally have outpatient prescription-drug coverage through Part D or Medicare Advantage plans, both of which are offered by private insurers. But most of these plans have a coverage gap, known as the doughnut hole. For 2018, once you and your plan have spent $3,750 on covered drugs, you’re in the doughnut hole. You then pay 35% of the cost for brand name drugs and 44% of the cost of generics. (These percentages will decrease as the doughnut hole closes in 2019 for brand-name drugs only. For generic drugs, the gap doesn’t close until 2020.)

Once you exceed $5,000 in out-of-pocket spending, you’re out of the coverage gap, and you automatically get “catastrophic coverage.” You’ll face only a small co-insurance or co-payment of about 5% for covered drugs for the rest of the year—but if you suffer from an illness like cancer and need $100,000 a year in drug treatments, that 5% share can quickly add up.

“If you do have a life-threatening or chronic or rare disease and you’re on Medicare, you’re likely to be very surprised by how much you have to pay for your drugs,” Klein says. “The majority of the patients we help are on Medicare.”

Be aware that if you have Medicare drug coverage, whether through a Part D plan or Medicare Advantage, drug manufacturer discount or co-pay coupons won’t help. Federal law prohibits drug companies from giving their coupons to people who get their health benefits from the federal government.

Figure Out a Strategy for Drug Coverage

If you are struggling to pay for expensive drugs, you have options. Perhaps you can negotiate with your pharmacist for a lower price, or look for charitable foundations or drug-company programs that might help with your out-of-pocket expenses. You can try arguing for exceptions to your plan’s rules to get a lower cost for your drug.

You can ask whether paying for a drug yourself might be cheaper than using your insurance, because you could then access a discount card or coupon. The generic for Nexium, which treats stomach acid, often costs $241 for 30 capsules, but discounts could cut the cost to under $25. “Shopping around can make a difference,” says Rich Sagall, president of NeedyMeds, a company that compiles resources for help with drug and medical costs. “You have to try all your options.”

The PAN Foundation, which Schaffner used, has more than 65 different disease funds and gives out grants to cover co-pays. PAN and similar foundations limit grants based on income, but they typically will work with applicants to help them qualify, taking into consideration monthly medical expenses and other adjustments to income. Schaffner, for example, says he didn’t have to include his house as an asset.

To find foundations, go to the Partnership for Prescription Assistance site and click on additional resources. Then contact each foundation for eligibility and application information. PAN usually can give you an answer within 15 minutes, even as you are waiting at a pharmacy counter. The foundation helped about 262,500 people last year, providing about $347.9 million in grants, with an average annual grant of nearly $4,800, Klein says. Other options include the Patient Advocate Foundation’s co-pay relief program and the HealthWell Foundation.

You often can apply for a second grant if your first one runs out. Foundations also will refer you to other foundations if a fund closes and you could get a grant elsewhere, says Krista Zodet, president of HealthWell, which has 60 disease funds, including ones for hepatitis C, multiple myeloma and pulmonary fibrosis.

If you can’t secure a grant, don’t try to save money by reducing dosages on your own, she says. Go back to your doctor. It may be uncomfortable, but let the doctor know you are having trouble paying for your care. Doctors are often willing to talk about the financial aspects of care and to work closely with patients to help them get what they need, she says.

If you pick up a prescription at your pharmacy and find you owe a $250 co-pay, don’t just walk away. Ask if the pharmacy can offer a lower price or has a low-cost drug program, such as Walmart’s $4 generic drug program.

Pharmacists sometimes are not permitted to tell you upfront they have a cheaper drug available but can inform you if you ask, says NeedyMeds’ Sagall. “Don’t be embarrassed to ask a lot of questions,” he says. NeedyMeds.org also lists other low-cost drug programs, or you can call its helpline at 800-503-6897.

You may be better off paying cash for a prescription drug, if you have a steep co-pay. In that case, download a discount card that can be used for generic medications from a website such as RXassist.org. You can save up to 85% on generic medications, and you’re eligible to use the card if you’re not accessing your insurance to pay for the drug, says RXassist program manager Shirley Titus.

Or, pursue a tiering exemption through your drug plan, says Leslie Fried, senior director of the Center for Benefits Access at the National Council on Aging. Drug plans use tiers to categorize drugs and drug pricing, and the drugs on the higher tiers are usually more expensive. But you can ask your plan to move the drug to a lower, less-costly tier. You will need your doctor’s assistance to request an exemption, Fried says, and “you may have to jump through some hoops.”

And reassess your Medicare Part D and Medicare Advantage coverage options each fall during open enrollment. If you are newly diagnosed with a chronic illness, you might consider switching to a plan with more coverage, although the price may be higher 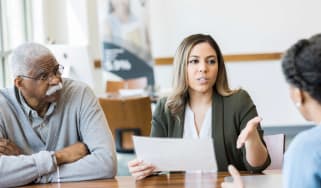 Consult an elder care lawyer preemptively to avoid making a panicked phone call in the moment.
3 Tips to Help You Navigate Open Enrollment in Your ‘New Normal’

With all the changes going on in workplaces across the country since COVID-19, your insurance and benefits needs might have changed, too.
Skip to ContentSkip to Footer