How to Dodge Tech-Stock Drama 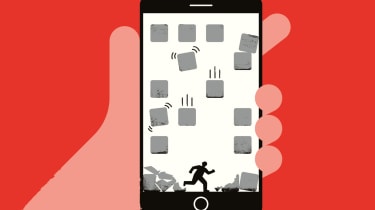 News that some of the country’s biggest tech titans will face more antitrust scrutiny gave their shares a shellacking recently, reminding investors that government and regulatory actions should be top-of-mind with these companies, and that investing in tech these days requires a discerning eye and nerves of steel.

In June, congressional lawmakers announced a bipartisan investigation into competition in digital markets. The announcement followed news reports that the Justice Department and the Federal Trade Commission have divvied up antitrust oversight of tech’s biggest players, including Google parent Alphabet and Amazon.com, perhaps in advance of formal probes. Google already faces billions of dollars in antitrust fines in the European Union, and presidential candidate Sen. Elizabeth Warren is among those calling for breaking up big tech companies. As antitrust worries intensified, a one-day tech rout in early June sent Facebook shares down 8%, Google down 6% and Amazon down 5%. The tech-heavy Nasdaq index briefly dipped into official correction territory, down 10% from its high. As of mid June, the stocks had essentially recovered.

More challenges ahead. Antitrust issues aren’t the only regulatory hurdles facing tech, and internet-focused firms in particular. Concerns about privacy and control of consumer data led to a strict new law in Europe last year. Another will take effect in California next year, and debate over federal data protection measures continues to heat up.

Meanwhile, tech companies have been put on the defensive with challenges to their corporate governance ranging from pay practices to diversity and discrimination issues to share-class structure, says Savita Subramanian, head of U.S. equity strategy at Bank of America Merrill Lynch. “A panoply of issues is cropping up for tech companies,” she says. “It looks like a sector that’s had a free ride for the past two or three decades and is only now starting to register with the U.S. government as a potential area for more regulation.”

In another corner of tech land, semiconductor makers are smack-dab in the middle of the trade war with China, as are companies such as Apple, which both assembles hardware components in China and depends on sales there. Apple shares lost 12% in May before recovering.

It’s a lot to keep track of. “We spend 99% of our waking world thinking about these risks,” says Matt Sabel, portfolio manager of MFS Technology Fund. If you own tech stocks in the regulatory crosshairs, be prepared for volatility and size your holdings in accordance with your risk tolerance, he says.

In the long run, Amazon, Facebook and Google have a lot to offer both consumers and investors, says Sabel, who owns the stocks. “But the jury is out on a lot of these regulations, and uncertainty is never good for the multiples on stocks.”

If you don’t want the drama, you might want to focus on other parts of the tech market. Software and tech-services firms are worth exploring, including Microsoft (symbol MSFT, $132), Accenture (ACN, $185) and Salesforce.com (CRM, $150). Also consider cybersecurity firms, including Palo Alto Networks (PANW, $203) and Symantec (SYMC, $19). And payment-processing firms, including Fiserv (FISV, $89) and Visa (V, $170), will benefit from the growth of e-commerce.

The market's best 5G stocks to buy should reward investors handsomely. But like with the technology itself, don't expect perfection immediately.