The Power of Reinvested Dividends

Seagate's regular (and rising) payout provides this investor some comfort in an ever-changing market. 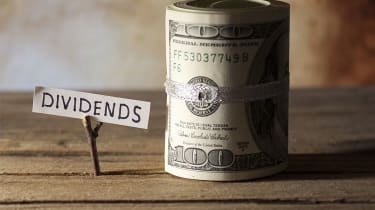 There’s something a little magical about the impact of dividends—particularly reinvested dividends—on the value of a portfolio. Dividends can keep the value of your investments rising even when market performance sours.

The dividend effect provides me comfort as I look over an investment landscape that has changed dramatically since I started the Practical Investing portfolio three and a half years ago. At the time, nearly every stock I examined seemed cheap. Now, it’s much harder to find a bargain. That doesn’t mean stocks won’t keep rising. But the market’s long, almost uninterrupted advance increasingly makes me appreciate the one nearly sure thing in an otherwise uncertain environment: the power of dividends.

The greater the dividend yield, the less I need to rely on stock price appreciation to deliver a reasonable return. Of course, when stock prices rise, dividend yields normally fall. But some of the cash-rich companies I hold have hiked their dividends at such a brisk pace that, despite rapid appreciation in share prices, yields have actually risen.

Consider Seagate Technology (symbol STX). I bought 435 shares in June 2012 for $23.11 a share. Because I’ve been reinvesting dividends (which Seagate has hiked four times since I bought the stock), I now own 482 shares. With the stock at $52 as of March 31, my stake is worth $25,078—a return of 149% on my initial investment. At the current price, the stock yields a healthy 4.2%. But the yield based on my initial purchase price is 9.3%. That will keep me comfortable with the stock even if it just treads water for a few years.

However, I expect shares of Seagate, which makes data-storage devices for personal computers, to do more than that. One reason is that the stock is one of the market’s great remaining bargains. It has been sliding since hitting $69 in December, partly because of perceptions that PC sales are weakening. International Data Corp., a technology-research firm, reinforced those views when it reported in January that PC sales fell 2% in 2014 and later predicted that sales would drop nearly 5% this year. Sea­gate shares now sell for a mere 11 times projected earnings over the next four quarters.

To be sure, analysts expect Seagate’s profits to slip in the current fiscal year, which ends in June. But I think this is a temporary blip and see the decline in the price as an opportunity to buy more shares. And that’s what I did. I snapped up 118 shares at $52.94 on March 27, bringing my total holding to an even 600 shares.

Why am I so confident? For starters, management is focusing on expanding Seagate’s fast-growing cloud storage business. On top of that, the company has plenty of cash on hand to pay its 54-cent-per-share quarterly dividend and even keep raising it.

Finally, I think a major cause of the PC slump is the nightmare known as Windows 8. Those of us who made the mistake of upgrading our PCs after Microsoft (MSFT) launched the operating system in 2012 have been suffering from its counterintuitive design and other shortcomings. The 8.1 update did little to ease our pain. Thus, I (and, I suspect, many others) have been waiting for Microsoft to unveil its next operating system before buying a new PC. My guess is that PC sales will experience a mini-surge once Microsoft gets its act together, and that will help fire up Seagate’s sales and profits.