Apple (AAPL): A Value That Goes Beyond iPhones

Apple's stock has a lot more going for it than just the hit iPhone X, and the market has yet to fully appreciate it. 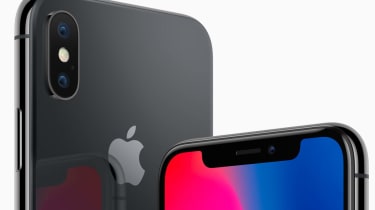 Apple Inc. (AAPL, $169.01) shares have gained 45% in 2017 and sit just below all-time highs, yet Apple’s stock still looks like a bargain buy for both the short and long haul. The iPhone maker is back on track, has more cash than ever and boasts a solid – albeit short – record of raising its dividend.

Most importantly, consumers have taken to the latest iteration of the iPhone, which is the company’s most important product by far. Indeed, thanks to its 10th-anniversary iPhone X, “Apple is getting its mojo back,” say analysts at UBS, who have a “Buy” rating on AAPL.

Apple shareholders tend to agree. “Apple has continued its product innovation, as shown in the iPhone X,” says Joshua Blechman, director of capital markets at ACSI Funds. “Analysts are knocking the price (it starts at $999), but it doesn’t scare the consumers one bit. Apple consumers have made peace with the price point and are willing to pay a premium for a premium product.”

But there’s more to the comeback than the iPhone X.

“Underlying demand is strong and not just for the iPhone,” UBS analysts note. “iPad has turned the corner with two periods of growth, Macs surprised to the upside (in the quarter ended Sept. 30), Apple Watch units jumped by over 50%, and services (such as Apple Music) increased by 24%.”

Lest anyone think the company is in danger of running out of good ideas, UBS says Apple’s unique organizational structure enables it to invent gadgets and services that consumers feel they need. It also has an advantage in the burgeoning field of augmented reality because of its tight integration of software and hardware.

However, being on the cutting edge of this potentially hot new consumer product category is just one factor that longer-term investors can feel good about.

For one thing, Apple’s liquid holdings are legendary. The tech behemoth had $268.9 billion in cash, cash equivalents and securities as of Sept. 30. Much of that cash is held overseas, but proposed tax legislation working its way through Congress – specifically, a low one-time repatriation rate that could drastically reduce the taxes Apple would pay on it – could prompt Apple to bring some of that hoard back home.

Repatriation holiday or not, Apple’s cash situation gives it tremendous flexibility. Raise the dividend? Buy back stock? Execute a bold acquisition? Apple can afford all three. Gushers of free cash also mean Apple has ample room to boost its quarterly payout – and, boy, has it ever. The company has hiked its dividend every year since it brought back regular distributions in 2012.

Regular dividend hikes are a key to successful income investing because they increase the yield on the original cost basis. The dividend rises, but the price you already paid for shares doesn’t. So while Apple currently yields just 1.6% for new money – versus 1.8% for the Standard & Poor’s 500-stock index – the company’s annual hikes will create ever-higher yields on your investment.

Consistent and ample dividend increases are an often-overlooked aspect of income investing, and Apple has everything it needs to be a long-term dividend stalwart.

It’s not often you can say this about any of the best stocks in tech, but the share price is right. Again, Apple’s stock has soared 45% so far in 2017 and is just a couple percent off all-time highs set in early November … and yet it still offers value.

AAPL shares change hands at 13.8 times analysts’ estimates for next fiscal year’s profits. That’s more than reasonable when analysts expect annual average earnings growth of 10% a year for the next half-decade, according to data from Thomson Reuters. The S&P 500’s components, which collectively trade at a forward price-to-earnings ratio of 18.2, are pricier than Apple despite having lower growth prospects on average. Tech peers such as Netflix (NFLX, 82 forward P/E) and Amazon (AMZN, 144 forward P/E) are far more expensive.

Heck, even notoriously low-growth utility stocks are more expensive than Apple. The utilities sector of the S&P 500 is trading at 18.6 times expected earnings, according to Yardeni Research.

No wonder Wall Street is bullish on Apple’s stock. Of the 30 analysts surveyed by Zacks Investment Research, 18 call AAPL a “Strong Buy,” and another five say it’s a “Buy.” Meanwhile, five are on the fence at “Hold,” and just one is convicted enough to rate the stock “Strong sell.”

A popular knock on Apple is that it’s a one-trick pony: It’s all iPhone and little else. That’s taking a narrow view, says David Kass, a professor at the University of Maryland’s Robert H. Smith School of Business, who notes that customer devotion to Apple products and services almost serve as an annuity.

“Apple may be viewed as a ‘subscription model’ with a loyal customer base very likely to purchase future products and services,” Kass said in a September interview.

Indeed, Apple’s Services division – which includes iTunes, the App Store, Apple Pay and other offerings – has become a growth dynamo. Services revenues jumped 34% year-over-year in Apple’s quarter ended Sept. 30., and is starting to take pressure off the iPhone. Services revenue improved from 13% of revenues in Q4 2016 to 16% in Q4 2017, while iPhone’s share declined from 60% to 55% over the same period.

As long as consumers stay within the Apple ecosystem – and they are famously loyal to the brand – upgrades, replacements and subscriptions will ensure revenue growth over the years and decades ahead.

It has become somewhat fashionable to say Apple’s best days are behind it. Maybe so. But strong fundamentals, gushers of cash and a cheap stock price make it look like the best in AAPL is yet to come.

Here are 13 dividend stocks that each boast a rich history of uninterrupted payouts to shareholders that stretch back at least a century.
Build a Bond Ladder