The host of CNBC’s "Mad Money" has lagged the market dramatically over the past 15 years. 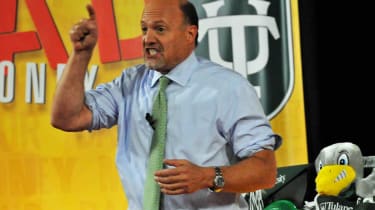 CNBC’s “Mad Money” features flashing lights, beeping horns and Jim Cramer, the screaming, fast-talking, always-in-motion host, who always has a strong opinion on which stocks you should buy and which you should sell. Right now!

It’s hard to look away from Cramer; he is terrific fun to watch. No wonder “Money Monster,” a movie that was released in mid May, centers on a thinly disguised Cramer, played by George Clooney. In the movie, an enraged viewer who was wiped out because he invested all of his money on what turned out to be a disastrous stock recommendation takes Clooney hostage.

Does life imitate art? Well, maybe not hostage-taking, but a new paper from two researchers at the University of Pennsylvania’s Wharton School finds that Cramer’s picks have been less than scintillating. To be more specific, from August 1, 2001, through March 31, 2016, Cramer’s Action Alerts PLUS Portfolio returned a cumulative 64.5%, compared with 126.1% for Standard & Poor’s 500-stock index, including dividends. On an annualized basis, Cramer, a former hedge fund manager, trailed the S&P 500 by an average of 2.2 percentage points per year over that nearly 15-year-long period.

What’s more, the Cramer portfolio has been about 5% more volatile than the S&P over that period, the Wharton paper, authored by Jon Hartley and Matthew Olson, finds.

Cramer doesn’t dispute the paper’s findings. “We have never promised outperformance,” he said in a statement. “We have promised transparency, teaching and a way to understand how the money-management process works.” He called the subscription service “largely an educational product.”

Cramer’s picks essentially matched the S&P through 2010. But since then, they have badly lagged the benchmark. From January 1, 2011, through March 31 of this year, Cramer’s picks returned an annualized 5.0%, compared with 12.2% annualized for the S&P 500.

Launched in August 2001, Action Alerts PLUS Portfolio has been a centerpiece of the financial advice offered by TheStreet.com. The website belongs to TheStreet, Inc. (symbol TST), a publicly traded company that Cramer co-founded in 1996. PLUS Portfolio subscribers, who pay $15 a month, always get the recommendations before Cramer buys them for the portfolio, the Wharton paper reports. Likewise, subscribers get Cramer’s picks before he airs them on “Mad Money.”

In March 2005, when CNBC launched “Mad Money,” Cramer converted the portfolio into a charitable trust. All dividends and other cash distributions received by the trust are donated to charity. Cramer and Stephanie Link were co-portfolio managers until last year when Link went to TIAA-CREF. Cramer is now the sole portfolio manager, but he works closely with Jack Mohr, the portfolio’s research director.

On its website, TheStreet compares the return of the Action Alerts PLUS Portfolio to the S&P 500 plus dividends received but not reinvested. That’s because the portfolio donates the dividends to charity rather than reinvesting them. The unusual alternative calculation doesn’t help the portfolio’s relative performance much. From August 2001 through June 30, 2015, according to TheStreet, the S&P 500 with dividends received but not reinvested returned a smidgen less than the traditional calculation of the S&P’s total return (with dividends reinvested)—a cumulative 122.8% compared with 124.8%. June 30, 2015, is the last date for which TheStreet reported returns.

The Action Alerts PLUS Portfolio has lagged the benchmark woefully, no matter how you compute the numbers. The lesson for investors is, perhaps, too obvious: When someone is screaming at you to buy anything, hold tight to your wallet. Good investing, alas, is usually pretty boring.

Bonds can be more complex than stocks, but it's not hard to become a knowledgeable fixed-income investor.
Stock Market Today 10/28/20: Dow Drops 943 Points as Investors Storm the Exits

America's seven-day average of new cases hit a new high, and with stimulus still in limbo, investors saw little to get cheery about Tuesday.