How to Survive the Economic Fallout from COVID-19

The bull market and economic expansion are over. Here's what to do now. 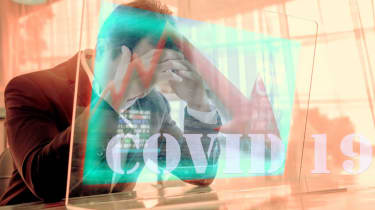 Call it the COVID Collapse. Global financial markets spiraled into bear market territory in record time thanks to the virulent, cross-border spread of the coronavirus that causes the COVID-19 infection. As the number of U.S. cases surged in mid-March and President Trump declared a national state of emergency, the specter of a global recession quickly morphed from economists' worst-case scenario to their base-case assumption. Americans already worried about their health are now frightened about their finances.

For U.S. stock investors, the bear attack seemed to come out of nowhere. The broad stock market, measured by Standard & Poor's 500-stock index, plunged to a 30% loss at one point in mid-March, closing on March 17 down 25% from a record high set only in mid-February. The new bear market is the 13th since World War II, and the quickest to close below the 20%-loss threshold that marks an official bear. The average decline for post-war bears is 33.5%. But some experts are struggling to find meaningful signposts in Wall Street history this time around. "It is safe to state that what has transpired does not have a perfect parallel to previous stock-market corrections and shocks," says chief investment strategist Brian Belski at BMO Capital Markets.

Where the market bottoms depends on the course of the pandemic. But it's important to remember that bear market bottoms are more of a process than a level on an index, and volatility may linger as the damage to companies' bottom lines and to the economy overall comes into sharper focus. "Without any fundamental guideposts to ground investors in reality, they're left establishing stock and bond prices on the basis of their worst nightmares," says strategist Jim Paulsen at the Leuthold Group. Strategists at Goldman Sachs have lowered their forecast for corporate profits in 2020—twice. Goldman now sees a 5% drop in corporate profits this year compared with 2019, with earnings collapsing in the second and third quarters before reviving by year-end.

A recession is likely. The virus first snarled supply chains from China, then whacked demand for goods and services as individuals and businesses hunkered down. The manufacturing sector was weak already. And the collapse in oil prices as global demand weakens and Russia and Saudi Arabia feud does more damage to the energy sector and the economy than lower gas prices will help consumers.

To support the economy, the Fed lowered its benchmark short-term rate to 0% to 0.25% and launched a $700 billion bond-buying program. Lawmakers are working on legislation that would provide paid sick leave to some workers, strengthen unemployment insurance and give tax credits and other relief to small businesses to lessen the impact of the virus. And the Trump administration is shaping a monster stimulus plan that could reach $1 trillion and include aid for airlines and small businesses, as well as checks mailed directly to Americans.

Even so, Kiplinger expects an economic contraction in the second and third quarters—meeting the definition for recession of two consecutive declining quarters—with meager growth of 0.2% for 2020, and unemployment rising from a current low of 3.5% to more than 5%.

What Should Investors Do?

Sharp, swift stock-market drops are often followed by dramatic rebounds. Goldman's chief strategist David Kostin sees a mid-year low of 2000 on the S&P 500, a 41% drop from the high. But he forecasts a sharp rebound—a bit higher than the median six-month return following previous event-driven bear markets—that could lift the S&P 500 to 3200 by year-end, a nearly 27% jump from its close on March 17. Not all strategists are as optimistic, but most are urging investors to take advantage of a rocky market to gradually add to holdings at bargain prices. "Investors should, in a disciplined, patient way, in line with their risk tolerance, add to certain sectors," says Sameer Samana, a global market strategist at Wells Fargo Investment Institute.

As you assemble a stock market buy list, tilt toward high-quality and dividend-paying investments. Look for companies with consistent earnings growth, wide competitive "moats" and strong balance sheets, with little debt and plenty of cash. According to strategists at BofA Securities, high-quality stocks with defensible dividends include software giant Microsoft (MSFT, $147), yielding 1.39% and health care firm Baxter International, (BAX, $81), yielding 1.09%. Fifth-Third Bancorp, (FITB, $14) is another BofA pick, yielding a whopping 7.74%. Companies that Goldman Sachs singles out for their stable earnings growth and strong balance sheets include Alphabet (GOOGL, $$1,118) and Costco Wholesale (COST, $307), both of which stand to benefit in the face of the coronavirus.

Tactical investors looking for other stocks that should do well during the COVID Collapse can consider so-called stay-at-home stocks. Zoom Video Communications (ZM, $111), which connects users across devices and locations in a single meeting. The stock has returned nearly 3% since mid-February. In the week ended March 13, Teledoc Health (TDOC, $118), says it provided roughly 100,000 virtual medical visits, in the U.S., a 50% spike from the prior week. Drug stocks that will benefit include Gilead (GILD, $75), currently testing a treatment for COVID-19, with results due in April. Moderna (MRNA, $28), is further along in creating a vaccine than any other drug company, according to research firm Morningstar. Quest Diagnostics (DGX, $86), is launching a COVID-19 testing service.