These diverse real estate investment trusts are delivering both income and price appreciation to investors. 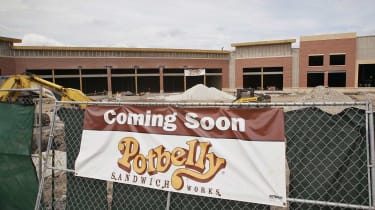 Real estate is anchored to the ground, but its values are flying high. By one yardstick—the Green Street Commercial Property Price Index—U.S. investment-quality property has never been more valuable. So real estate investment trusts, which own around 20% of America’s offices, luxury apartments, malls, warehouses, storage lockers and strip shopping centers, are writing yet another chapter in a 40-year story of success. Last year’s splendid returns are continuing in 2015, spanning all 14 flavors of commercial property.

Over the past 15 months, you didn’t have to guess whether urbanites would stay in their apartments rather than buy houses, or wonder whether Americans would return to the shops, credit cards at the ready. All you had to do was throw darts. “The whole REIT sector is a beneficiary of the insatiable demand for yield,” Raymond James analyst Vivek Jain said at a recent industry conference. Although REIT share prices have risen faster than their dividends in recent months, many REITs still yield more than 4% and nearly all of them pay better than 3%. That’s plenty to draw wide investor interest.

Property-owning real estate investment trusts’ tasty 28% total return in 2014 (with another 4% in 2015 through the second week of April) is also partly the result of bargains created after 2013’s rare sleepwalk. On average, REITs were priced 5.9% below their properties’ net asset value at the end of 2013, says SNL Real Estate. Those discounts are mostly gone, but only in a few cases does it appear REIT prices are overblown relative to property values, because those are also rising.

Also driving the resumption of the inexorable 40-year gain in REIT share prices: Dozens of realty trusts are repositioning themselves as tax-advantaged growth companies that happen to pay high dividends rather than as yield-centric investments. The timing is brilliant. Commercial property is not overbuilt, so rents are up in most cities and regions while land and property prices are climbing. Top-tier shopping centers are 15% more valuable than in 2013. Well-located industrial and warehouse space is appreciating just as briskly.

And while corporate America lobbies for a lower income tax rate, some firms that can meet the elastic legal definition of real estate are switching to REIT status, such as owners of cell-phone towers, billboards, data-server farms and even parts of the power grid. REITs pay no corporate tax if they pass 90% of taxable income to shareholders. Even utilities are exploring if it’s possible to REIT-ify themselves; the first power-infrastructure REIT just hit the market. If they can figure out how to make this work and pay good dividends, utilities will snag cheaper financing for long-neglected improvements.

REITs are still best known for managing and leasing properties acquired from others, but many currently successful REITs are eagerly developing new real estate as well. Here are five worth considering. (All prices and returns are as of April 7.)

One example is Alexandria Real Estate Equities (symbol ARE, $95.75, yield 3.1%, 2014 total return 44.0%, 2015 year-to-date return 8.7%). Though Alexandria is best known for biotechnology labs and research campuses, it has joined with Uber, the ride-sharing company, to build and jointly own a headquarters for Uber in San Francisco. Construction on the facility near AT&T Park will start soon, with occupancy (and income for the REIT) expected in 2016. ARE’s shares have been closely tied to the volatile market for biotech stocks—a mixed blessing, though a boon of late. This diversification should damp down volatility.

Digital Realty Trust (DLR, $66.03, 5.1%, 2014 return 41.7%, 2015 year-to-date return 0.9%) has 14 large parcels of developable land for additional data farms, plus a bunch of projects under construction. Digital says demand for its special type of real estate exceeds the supply in such major markets as Dallas, Houston and London.

Duke Realty (DRE, $21.51, 3.2%, 2014 return 38.8%, 2015 year-to-date return 7.3%) has launched more than $1.5 billion of industrial, warehouse and medical office development since 2012, mainly on vacant or recyclable industrial land (such as closed auto plants) it has accumulated since the recession. The new developments will add about 25% to Duke’s holdings. Meanwhile, Duke keeps selling tired suburban offices.

Lamar Advertising (LAMR, $59.17, 4.6%, 2014 return 7.4%, 2015 year-to-date return 11.6%) became a REIT a few months ago. It is gradually replacing tens of thousands of traditional billboards with digital signs that flash several messages as each driver passes by. By putting more messages before everyone’s eyes, the new signs produce ten times the revenue of a fixed board, but it takes a couple of years to recover the initial investment. Avoiding millions of dollars in corporate taxes by converting to a REIT will expedite the switch to digital and add to dividends. Many other REITs have big development plans, including the medical REITs that are beginning to rally after a slump. Construction is still below prerecession peaks, so first-rate retail and office space, at least in rich cities and suburbs, is tight. Alexandria says its average rent increases averaged from 10% to 18% in each of the first three quarters of 2014.

We still think REIT common shares are fairly priced or only a little ahead of next year’s projected cash flow and dividend growth. However, we are less enamored of some fresh REIT preferred shares because of their prices. Digital Realty, for example, issued preferreds in March 2014 with a 7.375% coupon. These units are way up from the original $25 to $27.61, for a yield to call in 2019 of only 4.5%. Because Digital’s common stock yields more than the preferreds (even after the common shares soared 50% since the end of 2013) and Barclays Capital predicts Digital will raise dividends 7.5% annually for the next five years, we’d skip its preferreds.

REIT preferreds are historically a solid source of high and fixed dividends, but it’s best to steer clear unless you can buy at or under $25 and the yield to call is at least 6%. Or you can buy new issues at par, which assures you five years of predictable income. Better news is that you can find newly-issued REIT bonds at a 3% to 4% yield for ten years, a good deal if you are comfortable with individual bonds. Most REITs, by the way, are rated BBB or BBB+ and a few are in the A tier, and almost all of them have strong balance sheets.

Jeff Kosnett is the editor of Kiplinger’s Investing for Income, a monthly newsletter devoted to uncovering strategies to boost the cash yield on your investments.