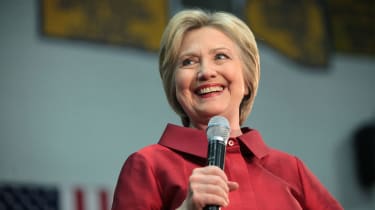 Compared with Republican presidential nominee Donald Trump, Hillary Clinton appears to lead a boring financial life. According to her latest personal financial disclosure form, she holds a relatively small amount of U.S. Treasury bonds, a big chunk of cash and a large stake in Vanguard 500 Index Fund, which essentially tracks the performance of the U.S. stock market.

Precisely how much her investments are worth isn’t clear because the financial disclosure rules, issued by the Office of Government Ethics, require only that a candidate list a range of values for each asset or investment the candidate or the candidate’s spouse owns. A candidate running for president or vice president must file reports with the Federal Election Commission soon after declaring his or her candidacy. The candidate must also file updated reports by May 15 of each year in which he or she remains a candidate. Both Clinton and Trump filed their latest disclosures in May.

Based on Clinton’s report, both her cash and stock fund holdings were valued at $5 million to $25 million. She also reported owning $50,000 to $100,000 in Treasury bonds, as well as five life insurance policies, including those held jointly with her husband, former President Bill Clinton, with a cash value of up to $2.6 million.

All in all, Clinton earned at least $172,500 in dividends and interest income last year. That’s a hefty haul, but it pales in comparison to the income she reported from book royalties and speaking fees. Her 2014 memoir, Hard Choices, brought in more than $5 million last year. She also earned about $1.5 million for giving speeches in 2015.

Overall, Clinton’s investments seem “pretty innocuous,” says Dan Auble, a senior researcher at the Center for Responsive Politics, a nonprofit group in Washington, D.C., that tracks money in politics. The Clintons have set up trusts for their residences, life insurance policies and Hillary’s book royalties. The trusts may help with tax and estate planning, but they don’t appear to hold any additional investments or assets, which would have to be identified on disclosure forms if they exceeded $1,000 in value.

Clinton’s investments haven’t always been so plain-vanilla — or low-risk. In the late 1970s, she famously turned a $1,000 investment into nearly $100,000 by speculating on cattle futures over a 10-month span (sparking a controversy in 1994, when the White House disclosed her trading activity).

Back in 2007, she and her husband jointly held stakes in dozens of individual stocks, ranging from Amazon.com and Berkshire Hathaway to ExxonMobil, News Corp. and Safeway, according to her 2008 financial disclosure. None of those positions amounted to more than $1,000, however, and the couple sold all the stocks in advance of her 2008 run for president.

Since then, Clinton’s investing appears to have settled into a simple mix of stock index funds, government bonds and cash. Based on her disclosures dating back to 2007 — filed for every year except 2014, when she was not in office and had not declared her candidacy for president — she has not held any individual stocks or traded much of anything, keeping her money in life insurance policies, cash, Treasury bonds and the Vanguard stock fund, which closely tracks the performance of Standard & Poor’s 500-stock index. Most of her income, outside of her government jobs, has come from book royalties and speaking fees.