What Investors Can Learn from the 2016 Presidential Election

Beyond the candidates, we're seeing a spotlight on globalization and demographics—two forces sure to steer the economy for years to come. 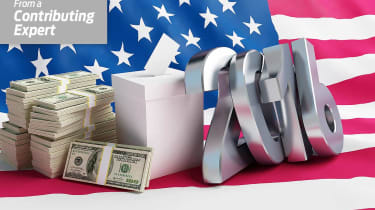 Ask any political junkie, and they'll tell you that the 2016 presidential campaign has been one of the strangest they've ever experienced. The rise of billionaire/reality TV star Donald Trump and Vermont Senator Bernie Sanders, the wild and woolly TV debates, and how wrong the pundits have been at predicting anything has been unprecedented.

But if we set aside the drama, we may discover that the most important thing we can learn from this election has nothing to do with the candidates. Instead, the most important takeaways are how the two mega-forces of globalization and demographics have changed our country and the influence they will have for years to come. Investors would be wise to pay attention.

We're Living In A Global Village

First let's look at globalization. We've heard a lot of talk about trade, trade agreements and jobs from the candidates, but unless you've been personally affected, much of it seems more abstract than real. So let's make it real.

There's no question that we have reaped the economic benefits of globalization. Trade liberalization alone increases our annual output by $300 billion to $500 billion, according to the Peterson Institute. Trade creates new jobs as well as destroying old ones. In 1992, 14.5 million or 10.4% of all jobs were tied to trade. By 2014, that number had grown to 41 million or 21.7% of all jobs, according to Business Roundtable.

But many of us missed the fact that globalization also gave us the benefit of lower prices on personal goods. The following chart gives you an idea of what happened to the prices of some commonly purchased goods between 2002 and 2012.

Yes, there have been downsides to these consumer benefits. The first trade-off of globalization has been domestic jobs. You can't miss that on the campaign trail. But it's important to understand that while not all of the job losses are a result of globalization, many are. The chart below shows manufacturing job losses by sector between 2000 and 2015. As you can see, while a number of sectors have been hit, a few have been decimated.

The second trade-off has been lower wages. The next chart shows the change in real wages by sector between January 2009 and December 2015. While wages haven't grown dramatically for any sector (except financial services), it's clear that individuals in the services sectors (financial services, information, education/health and leisure/hospitality) have fared much better than individuals in the construction, manufacturing and auto sectors.

So we've learned that globalization is a double-edged sword. Many individual companies and investors have benefitted from rising stock prices tied to increased corporate sales and profits. But it has been devastating for a number of U.S. cities, workers and their families. During this election cycle, we've heard the voices of many of those affected individuals.

Looking back, it's easy to see how the Baby Boomer generation dramatically affected our country and the economy. According to a 2008 McKinsey and Company study, Baby Boomers broke all of the previous generations' records for attaining the highest levels of education. During their working years, they have seen their incomes rise to the highest level of all generations.

As consumers, Baby Boomers have been the dominant spenders for two decades, and they have spent more at every age than prior generations. They have driven the growth of industries such as personal electronics, recreation and health care.

As investors, Baby Boomers have prospered from unprecedented increases in the stock and real estate markets. As the value of their assets rose, their spending increased, and the generation's saving rate fell to all-time lows. Now, as they look ahead to the end of their careers and retirement, they will change the face of retirement in America.

Like Baby Boomers, the Millennial generation will make its mark on the country by influencing our culture and the economy. Millennials have been particularly visible in their support for Democrat Sanders and his message. In the Michigan primary in early March, exit polling found that 81% of Democratic voters age 18 to 29 cast their ballots for Senator Sanders. In New Hampshire, 83% of Democratic voters chose Senator Sanders.

According to a 2014 Pew Research Center study, they also look different than the generations that preceded them. For example, Millennials are:

These results shouldn't be surprising. This generation was shaped by the shock of 9/11. Yet, they are more supportive on issues such as gay marriage and are more open to different ways of life than previous generations.

This election, the Millennial generation is making itself heard, and this is just the beginning. While we don't know where they will take us, we do know that they will be a social and economic force for many years to come.

Globalization and demographics, two mega-forces and hot topics this election, will continue to influence the markets in the future. The best advice to investors: Keep your eyes and ears open to sectors and companies that develop the best ways to capitalize upon these forces, and invest accordingly.

Jan has over 40 years of experience in the financial services industry and holds a BA in political science from the University of Denver.