A recreational land buyer describes how he plans to enjoy his investment.

Simon Blair, 30, loves Oregon's open spaces and his outdoor lifestyle. He and his wife, Mindy, recently bought a 20-acre parcel of land in southern Oregon, outside Ashland. Blair is a mortgage loan officer and volunteer fireman and views his purchase as an investment. But he's also a hunter and an avid horseman, and he and his wife plan to use their land as a getaway from the hustle and bustle of life in the city.

Blair, who also owns property elsewhere in the state, plans to keep his new land for at least three years. Although the Blairs won't live on the land full-time, they do intend to make improvements and possibly even build a cabin or small house. Most people in the area use solar power because the land is so far from the city limits that it's not on the electrical grid.

We spoke with Blair a few months after his purchase. He discusses his own experience as a land buyer and offers advice to other shoppers hoping to find their own rural retreat.

Own Your Piece of ParadiseSLIDE SHOW: Great Places With Open Spaces

KIPLINGER'S: Why did you want to buy 20 acres of land?

BLAIR: Real estate prices are better in this area since the market has taken a turn, so my wife and I were just shopping around. We wanted to buy either raw land or an investment house. We have horses, and I like to hunt, so we'll use the land for recreational purposes.

Was that a good price? Yes. The land was inexpensive because it was going into foreclosure. It was originally listed much higher.

How long did it take you to find this property? I wasn't looking for it in particular -- I just happened to see it. As a loan officer, I'm always looking at land to see what prices are like. When I saw this tract, it was such a good deal that I couldn't pass it up.

How long do you think you'll hold onto it? It depends on where my finances are at down the road. I'll keep it at least there years, but I may hold on to it forever.

Do you view it as an investment? Yes.

Will you build a house on the property? I just finished my own house last year, so my wife and I don't plan to relocate. If I do keep the place for the long term I may build a cabin or a small house, just as a place to go to get away.

Would you have electricity and water? I plan to drill a well this fall. The property is too far away from residential power to be on the grid, so any electricity would likely have to be solar.

Do you plan to develop the land? No, it wouldn't really serve its purpose if I did that. If I don't build a cabin for myself, I'll probably end up selling the land with improvements.

What kind of improvements? I'll probably get home site approval, in addition to the well and the septic system. I'd like to finish the fencing and gates and cleaning up the property a little bit. I might put in a pond for fire prevention and, who knows, maybe a little cross fencing for a horse pasture. 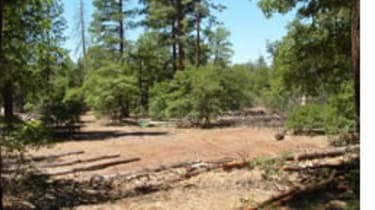 Have you done any work so far?  I've cleaned up a lot of garbage, probably left from people squatting on the property. Much of it was cleaned up before I bought the land, but there was still quite a bit left to haul off -- a couple of truck and trailers full.

Will you continue to accumulate more land? Yes, that's the goal. My wife and I will probably invest more in homes than in raw land because raw land is tough to finance. I have a lot of equity in the house I just built so I borrowed against that to buy this property. But I can only do that so many times before I run out of equity.

What is the best advice that you can offer to other land buyers that are looking for recreational land? Before you even start to look, make sure all your ducks are in a row. The best deals are only there for a very short time. It's fun to look, but if you're even going to be slightly serious about it, you better make sure that you can do something about it when you have to. I bought both my pieces of land within about 48 hours of finding them.

And be aware that raw land is tough to finance. Don't think it's just like buying a house -- there's no 100% financing. There's no 5% or 10% down. You pretty much have to have significant money to put down. [For more on buying recreational land, see Own Your Piece of Paradise.]

If you could do anything differently in your purchases what would it be? I don't know if I've done enough yet to where I could say I would do something differently. I think I've done a pretty good job so far. I took my time and waited to find the right deal.

It's important not to get desperate. Something always comes up. Being in the mortgage industry, I've found that when people get desperate, they make bad decisions and bad purchases. That's much of what happened in the housing market. Too many people were desperate to buy, so they bought on the bubble, and then the bubble popped. And now people's houses are worth less that what they bought them for. If everyone would just take their time a little bit more, they'd be much better off.

What do you like about Oregon? The weather and the people -- and that there's plenty of opportunity to get away from people. This area is great for many reasons, from recreation to hunting to job availability.