Near term, a bias to U.S. stocks makes sense. But long term, you need to capitalize on recoveries in the rest of the world as well. 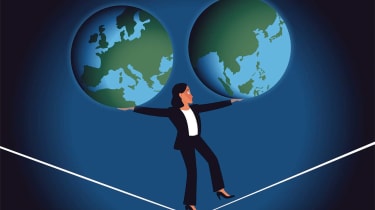 Investing in foreign stocks may not be as precarious as walking a tightrope, but lately, it hasn’t been a cakewalk, either. For more than a decade, international shares have trailed U.S. stocks. Then came the pandemic sell-off. From peak to trough, the MSCI EAFE and the MSCI Emerging Markets indexes nose-dived 34% each, level with the drop in Standard & Poor’s 500-stock index.

Most markets have rallied since then, but U.S. stocks still lead the way, thanks in part to a slew of aggressive monetary and fiscal policies. Good news about the coronavirus battle has buoyed stocks, too. (Returns are through May 15, unless otherwise noted.)

A bias toward U.S. stocks over foreign shares makes sense near term. “We have more confidence and visibility around the trajectory of the recovery here in the U.S.,” says Katie Nixon, chief investment officer of Northern Trust’s wealth management group. But that doesn’t mean you should bail on foreign stocks for the long haul. International shares are 43% of the world’s market, and they deserve a place in your portfolio.

The same forces that are driving U.S. stocks upward today will also fuel recoveries in the rest of the world

Stay diversified. Foreign markets won’t always lag. They have led U.S. stocks for extended stretches before, including between 2003 and 2007. “There are clear cycles where international stocks do better,” says Sebastien Page, head of global multi-asset allocation at T. Rowe Price, “and it will happen again.”

Other factors bode well for foreign stocks, too. Shares are cheap relative to historical valuations, for starters. According to Northern Trust data through April, foreign stocks currently trade at roughly 14 times expected earnings for the year ahead, a 20% discount to their long-term average multiple. U.S. shares, by contrast, trade at a 20% premium to their historical average.

Nixon expects a 10% gain in foreign stocks compared with an 8% climb in U.S. shares over the next 12 months. The same forces that are driving U.S. stocks upward today—aggressive monetary and fiscal policy, improvement on the health care front and a resumption of economic growth—will also fuel recoveries in the rest of the world, she says.

Add a dose of foreign stocks to your portfolio with Vanguard Total International Stock ETF (symbol VXUS, price $44, expense ratio 0.08%). The fund holds shares in emerging and developed countries. Over the past five years, the ETF has beaten the MSCI ACWI ex USA index, albeit with a 1.1% annualized loss per year. The mutual fund share class, Vanguard Total International Stock Market Index (VTIAX, 0.11%), requires $3,000 to open an account.

Fidelity International Growth (FIGFX, 0.99%) is one of our favorite actively managed foreign-stock funds. Manager Jed Weiss looks for foreign companies that have been able to raise or hold prices steady for their goods or services even during tough times. Over the past 12 months, the fund has returned 3.1%, which beats the EAFE by more than 15 percentage points.

We also like Vanguard International Growth (VWIGX, 0.43%). Two firms, Baillie Gifford and Schroders, run the fund for Vanguard. The managers focus on growing, high-quality companies in developed and emerging-market countries. Nearly one-fourth of the fund’s assets are invested in emerging markets. Over the past year, the fund’s 8.4% return beat 96% of its competition.

Place some tactical bets. Some countries are primed for a recovery. Life is creeping back to normal in China and in some of its neighbors, including Hong Kong and Taiwan. These countries, particularly China, have been active in implementing policies to help prop up businesses and financial markets. “The combination of a strong public health system and strong policies in China gives the stock market resilience to the downside and acceleration to the upside,” says BlackRock strategist Mike Pyle.

Two funds we like: Matthews Asia Innovators (MATFX, 1.19%) and T. Rowe Price Asia Opportunities (TRAOX, 1.15%). The Matthews fund holds nearly 70% of its assets in China and focuses on Asian companies that are setting trends in their industries. Chinese internet giant Alibaba Group Holding is a top position. T. Rowe’s Asia Opportunities scours the region to find high-quality large and midsize companies trading at reasonable prices. China, India and Hong Kong are its biggest country allocations. For a straight shot of China, consider Matthews China (MCHFX, 1.09%). Just buckle up for a rocky ride.

Parts of Europe have begun to open up shop, too. Thanks to “diligence” in handling the health crisis and the region’s social safety net policies, says Brian Nick, Nuveen’s chief investment strategist, some European economies could get back to normal quicker than the rest of the world. At T. Rowe Price European Stock (PRESX, 0.97%), longtime manager Dean Tenerelli invests in firms with good management, strong franchises and healthy cash flows. The fund’s 10-year annualized return beat 86% of all Europe-focused funds.