Amplify Online Retail: A Bet on How We Will Shop

This ETF invests in fast-growing internet retailers around the world. 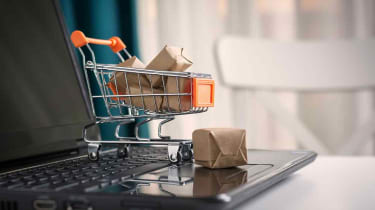 The pandemic brought business at many stores to a near-screeching halt. But some online retailers thrived during the quarantine—including Overstock.com (symbol, OSTK), where April sales were up 120% compared with April 2019.

That helps explain why the Amplify Online Retail (IBUY) exchange-traded fund, which owns shares of Overstock, posted a 25.7% return over the past 12 months. That beat 99% of its peers (funds that focus on consumer-spending stocks). Over the same stretch, the broad market eked out a 2.5% gain. Two of the ETF’s best performers, Stamps.com (STMP) and Shopify (SHOP), each notched triple-digit percentage gains over the past 12 months.

The fund tracks an index of U.S. and foreign companies that generate at least 70% of annual revenues or $100 billion in annual sales from internet-based retail, travel or services. The 47 stocks that match the ETF’s parameters are weighted equally, so the shares of Latin American online auction and e-payment firm Mercado Libre (MELI) or Peloton Interactive (PTON), for instance, get as much play as shares of Chinese e-commerce giant Alibaba Group Holding (BABA) or Amazon.com (AMZN), the biggest online retailer in the world. The fund is rebalanced twice a year.

In the U.S., online sales account for 11% of total retail sales; in China, roughly 35%; and in Europe, nearly 10%, on average. “It’s still early in the game” for online retail, says Christian Magoon, chief executive of Amplify. Retail e-commerce sales worldwide are expected to increase to $6.5 trillion in 2022 from $3.5 trillion in 2019, according to Statista.

Actively managed ETFs are starting to blossom in popularity. Investors unfamiliar with the space can start with these seven active funds.
Skip to ContentSkip to Footer