This Man Stole My Identity

David Dahlstrom, 44, of Salt Lake City endured 17 years of personal-finance hell while an impersonator in California bounced bad checks, ran up credit-card bills, and, starting in 1990, racked up a string of felony convictions in his name.

How did this nightmare begin? My wallet disappeared from the glove box of my car in 1985. Ten years later, my wife and I tried to get a car loan and they said our credit score wasn't very good and that they were going to charge a high rate.

Someone had applied for credit in your name? Yes. I checked my credit report, which showed $4,600 in delinquent charges on a credit card. I was cleared of those charges. Then in 1997, Midway Car Rental came after me for damages on a car it said I had rented and then wrecked. 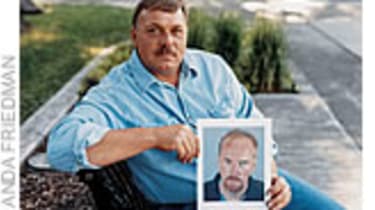 What steps did you take? I filed a report with the Salt Lake City police, but they said California was out of their jurisdiction. I contacted the North Hollywood police, but they didn't believe my story. I finally talked to a Midway manager and worked it out. Then in 2001, an insurance company called, saying I was involved in a hit-and-run accident in southern Utah.

How did you stop this guy? I'm a locksmith. Last year, I was on a job at a crime scene and my fingerprints were everywhere. The detective told me there was a warrant out for my arrest for violating parole. I finally reached the parole agent of the guy using my name, who asked me to come to California. Before I got there, the parole office called to say that I had been arrested for stealing a car.

But they had really picked up the guy who was using your name? Yes. I talked to a Los Angeles detective in the identity-fraud unit, who asked me to send more documents. Two weeks later, he called back and told me he believed me. I cannot explain to you how thrilling it was to have these people help me. And to see the guy who stole my life go to jail.

EDITOR'S NOTE: York Rogge, the man who stole David Dahlstrom’s identity, was convicted of ten counts of identity theft and one count of forgery. He's been sentenced to three years in jail and will face deportation proceedings after he serves his sentence.

Your credit score is a key indicator of your financial well-being and of the risk you pose to lenders. How good is yours?
Banks Canceling Credit Cards, Cutting Limits