Build Your Own Company

How one woman started out as a secretary and found entrepreneurial success as the CEO of a multi-million-dollar construction company. 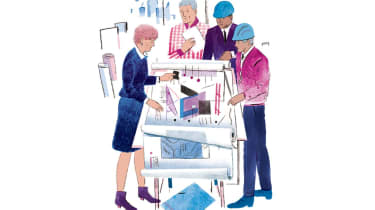 On the way to a meeting of the Women's Leadership Forum in New York City, I settled back on the train and immersed myself in the Harvard Business School case study that would be the topic of the forum. I've always thought of case studies as academic exercises, but the real-life story of Linda Rabbitt, the founder and CEO of rand* construction, a multi-million-dollar company based in Alexandria, Va., had all the ingredients of a compelling novel.

Rabbitt’s decision was a smart one that’s becoming more common, says Harvard Business School professor Boris Groysberg, who authored Rabbitt’s case study and also spoke at the forum. “If you leave on good terms, chances are former employers will reach out to you in the future,” says Groysberg. “It’s also a signal to other employees that the grass isn’t greener.”

Star power. Groysberg, author of Chasing Stars: The Myth of Talent and the Portability of Performance, specializes in studying women in leadership roles. He says that Rabbitt “does a lot of the things that stars do.” For example, star professionals have broader and deeper networks, and women tend to have more external networks than men. Women who make it to the top are survivors, and Rabbitt is the definition of a survivor: “She had to establish credibility in a heavily male-dominated industry.”

Being a woman in the construction business carried “zero advantage,” says Rabbitt. After she remarried, her second husband encouraged her. “He told me, ‘You keep thinking you need to be an engineer. But you need to be Lee Iacocca, selling the company and leaving the rest to your superintendents.’ ”

In his research, Groysberg found that when star men change jobs, they don’t do as well in their new organizations as star women who make a switch. One reason is that women have to rely more on their own talents, which makes them more portable. And they’re more thoughtful about making sure that their new employer is a good match, while men tend to move to boost their compensation.

Successful women also credit the support they receive from spouses who help out at home and fathers who told them anything is possible. Rabbitt would agree. One of her regrets, she says, is that “my father never saw my success.”