After big rebounds in housing prices, more modest gains are likely this year.

by: Gillian B. White

While the housing market has clearly come a long way since the depths of the recession, there’s still a long way to go before the industry returns to normal. Indeed, it’s unlikely that measures of housing activity will return to the peaks seen before the bubble burst in 2007, and in many cases it would be undesirable. But some key gauges of housing health, such as housing starts and new-home sales plus mortgage delinquencies, are still struggling to recover to levels that preceded the big run-up in the middle of the 2000s decade.

New-home inventory and new-home sales, for example, remain more than 40% below 1998-2002 levels. They are more than 60% below their peaks. In addition, the 1.07 million new homes expected to be started in 2014 is more than 30% below the typical prebubble pace of 1.5 million. The 2005 peak topped 2 million. Still, building is picking up and will gain further after the first quarter of this year; the unusually harsh winter is temporarily dampening activity in many parts of the country. Builders are eager to cash in on strong buyer demand, driven higher by inventory constrained by the construction drought that lasted from 2008 through 2012. Annual housing starts will grow by 15% this year, passing the 1 million mark for the first time since 2007.

Similarly, the number of delinquent mortgages remains a problem. Though the share of mortgages in trouble is 32% below peak levels — when more than 9 million borrowers were seriously behind on their payments — it remains 35% above the 1998-2002 norm. It’ll be a few more years before more homeowners are able to get current on loans, as deals are worked out with banks, or foreclosures and short sales fully work their way through the market.

The good news is that the average annual gain in home value and sales of existing homes are closer to hitting the mark. This year, we expect home value to appreciate by an average of 4% to 4.5% nationwide. That’s a significant cooling from 2013, when home prices climbed an average of more than 11%. Rising mortgage rates will temper demand and there’ll be fewer investors bringing all-cash offers to the table, as bargain prices and rock-bottom interest rates fade away. For the market as a whole, the slowing growth is positive, alleviating concerns about the prospect of a new housing bubble in hot markets and implying a more stable, sustainable period of growth ahead. 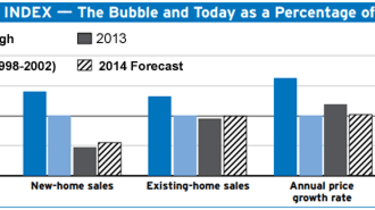 Steady gains in home values will also help bring sales of existing homes to normal levels, as they lift more homeowners out of underwater mortgages, encouraging them to sell. Indeed, sales of existing homes will grow by about 4% this year, with around 5.3 million homes sold in 2014. That’s within spitting distance of the pace of about 5.34 million that was considered normal during the pre-boom-and-bust period, but a long way off from the more than 7 million homes sold during the height of the bubble.

The higher home prices in combination with increased mortgage rates mean that affordability, too, is creeping back toward more normal levels. Historically, a median-price home would cost about 20% of household income. In 2013, it only took about 15%. As rates on 30-year mortgages rise to 5% in 2014, it will take closer to 17% of household income to purchase a median-price home. While that means fewer would-be buyers will be able to purchase homes, it also indicates the extremes of the market are disappearing.