3 Signs the Housing Recovery Has Arrived

Buyers are back, building is up -- and housing is poised to add to the economy instead of pulling it down.

Hallelujah. Housing is firmly on the upswing. Next year, it will add half a percentage point to GDP growth. By 2014, it will once again be a significant contributor to job creation, consumer spending and economic gains, bolstering this weak recovery. Every $100 bump in average home prices lifts consumer spending by $5. Some signs that the tide has finally turned and that housing will be a positive force in coming years:

SEE ALSO: Hazards Ahead for the Economy

One factor fueling the gain is buying by investors, many of them paying cash for the properties. But the investment isn't the kind of get-rich-quick, buy-and-flip purchase that fanned last decade's housing market boom and subsequent bust. This time, strong rental demand is the lure. Investors figure their properties will yield a positive cash flow right from the get-go and earn a profit month after month. It helps that about 36% of renters now opt to lease houses rather than apartments -- a share that's up from just 31% in 2006. 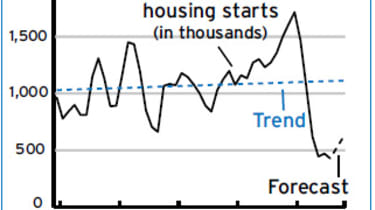 2) The pace of building is picking up as well, with housing starts in some states -- Washington, Iowa, Nebraska, Texas and South Carolina, for example -- likely to near levels last seen in 2000-2003 by the end of the year. Nationwide, starts will climb by 17% next year.

Builders are more optimistic than they've been since mid-2006, at the peak of the boom. Indeed, some are busy enough to be hiring and are having trouble finding help. (Many of the 2 million or so construction workers who lost their jobs in the recession are driving trucks, or doing landscaping or other work now. Some who immigrated during the housing boom returned to their homelands when their jobs disappeared.)

3) The number of unsold homes is easing and the foreclosure tsunami, fading, with the share of mortgages delinquent by 90 or more days a third lower than in 2010. Distressed sales are now a fourth of the total -- lower than last year, though still high. Mortgage rates are sure to remain near historical lows for a year or more, thanks to ongoing monthly buying of mortgage-backed bonds by the Federal Reserve. 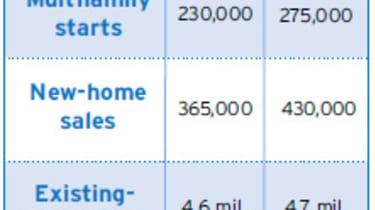 What's more, a surge in pent-up housing demand is inevitable, once the economy starts to pick up some more steam and young folks who delayed home buying plunge into the market. The usual rate of household formation -- young men and women leaving their parents' nests and setting up their own abodes, plus new immigrants establishing households in the U.S. -- has been severely retarded in recent years by the recession. As a result, there are now about 4 million fewer households than there would be had the historical trend continued. Those households-to-be will come flooding on the market

Of course, the climb back for the housing industry will be neither swift nor uniform. As Celia Chen, an economist who focuses on housing for Moody's Analytics, said in a recent report, "Never before in modern history have home sales, homebuilding and house prices collapsed so deeply and so widely across the nation."

So it will be a few years yet before housing starts and sales return to their long-term trend lines, much less their peaks. For Las Vegas, Tampa, Fla., and other cities where prices have sunk up to 50% since 2006, the upward slog will be even longer, and today's tight lending standards won't help. But, after six painful years, the outlook is for real, measurable improvement.

Affordable small towns aren't necessarily the best places to live for everyone, but each cheap small town on our list has its charms.
5 Great Places to Buy a Vacation Home

With remote work on the rise, more people are looking for a permanent getaway.
Timely Reasons to Buy a Vacation Home

With remote work on the rise, more people are looking for a permanent getaway.
13 Tax Breaks for Homeowners and Home Buyers

Owning (or buying) a home is expensive. But at least there are some tax deductions, credits, and exclusions that can help you recoup some of those cos…
Skip to ContentSkip to Footer