A Renewed Global Focus On Helping the Hungry

With world hunger a growing problem, the United States and other wealthy nations are stepping up to the plate with more emergency food aid as well as promises to share technology and know-how so poor countries can do more to help their farmers grow more food.

They’ve pledged to provide $22 billion by 2012, including $3.5 billion from the U.S. for food exports plus initiatives to bolster farming in poor nations. The needs are great. The number of underfed and starving people in Africa, Asia and elsewhere will stay above a billion in 2010, a level reached for the first time this year.

But the goal of rich nations to halve world hunger by 2015 is a pipe dream. Developed nations have plenty of problems at home that require attention, preventing them from doing even more to help hungry people around the world.

Private interests are pitching in, too. Bayer CropScience, for example, is teaming up with Asia’s largest agricultural research institute, based in the Philippines, to form a database of more than 2,000 rice strains to speed the arrival of new varieties and fight bacterial blight. Agricultural giant Monsanto is donating its biotech savvy plus its white corn seed to help a partnership in eastern Africa develop drought tolerant varieties. And the Bill & Melinda Gates Foundation has pledged $1.4 billion, with $120 million awarded in grants so far, to invest in better seeds, training, market access and policies that support small farmers. Bill Gates, the foundation’s cochair, says that “helping the poorest small-holder farmers grow more crops and get them to market is the world's single most powerful lever for reducing hunger and poverty.” The foundation’s initial grants are being targeted to produce higher yielding varieties of sorghum and millet as well as to new varieties of sweet potatoes that resist pests and have a higher vitamin content.

Rebounding global ag commodity prices will make it even harder for poor nations to feed hungry people. The index kept by the United Nations’ Food and Agricultural Organization (FAO) is at its highest level since September 2008. For dairy items, it’s up 80%. Even the recent recession hasn’t had much impact on prices in poor nations, according to a second FAO index that tracks the prices of 864 basic foods in 68 developing nations. In that food market measure, prices remain about 25% higher than two years ago in two-thirds of the countries included in the index.

Note that the FAO is also actively involved in helping developing nations overcome hunger. A joint effort by the FAO and Germany, for example, has built 45,000 small silos in 16 countries for local storage of basic foods, avoiding spillage, insects and waste.

Long term, ramped-up efforts will do more than just address hunger. They’ll help developing nations to expand their wealth, which in turn will allow them to expand trade with the U.S. and other developed nations. 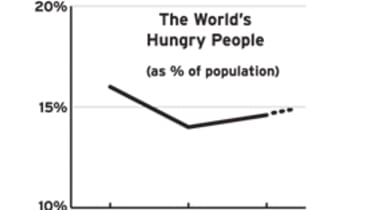