As Drought Takes a Toll, Water Prices Will Rise

Conservation and technological advances will help utilities meet needs, but at a cost. 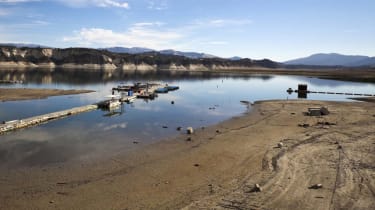 By now, you’ve no doubt read all about California’s historic drought, which is withering farmland and sparking emergency water rationing. But unless you live there, you might not realize that much of the American West is nearly as parched as the Golden State. Moderate to severe drought sprawls across the desert Southwest, the Southern Plains from Texas to Kansas, and much of the normally wet Pacific Northwest.

Technological solutions could go a long way toward relieving drought in many areas. Graywater recycling systems, for instance, capture soapy water from shower and sink drains and clean it enough to use for flushing toilets or watering lawns. Systems large enough for a modest office building can cost $50,000 to $100,000, but the resulting water savings mean the buyer can break even on the investment in about five years. Graywater setups figure to gain in popularity wherever outdoor watering is restricted because of drought.

Graywater helps, but some drought-stricken communities will likely have to turn to more extreme forms of recycling. Two towns in Texas – Wichita Falls and Big Spring – opted for a new type of water reclamation that is likely to pop up across the arid West in coming years: direct potable reuse (DPR).

In essence, explains University of Texas civil engineering professor Desmond Lawler, DPR treats and filters municipal wastewater until it is clean enough to go directly back into a town’s drinking water supply. Residents were naturally skeptical, but the DPR process is so effective, says Lawler, that it “removes practically every molecule that isn’t water.” In fact, the resulting water is so clean that it is essentially tasteless, and therefore is mixed with regular freshwater to supply the minerals that “flavor” normal tap water.

While promising, such high-tech solutions can go only so far in freeing up new water sources. Ultimately, drought-stricken communities will rely heavily on an old-fashioned fix: conservation. California has ordered emergency water cuts, and other dry regions are also looking to cut down on water usage where they can. In Oklahoma, for instance, the state’s water resources board is studying ways to encourage water saving, says spokesman Cole Perryman. That includes incentives for municipal water agencies to pinpoint and fix leaking pipes and for farmers to switch to no-till planting, which helps soil hold more water.

In the Southwest, the federal government is offering funds to states along the Colorado River that devise conservation plans to reduce the amount of water being withdrawn from that vital water source. Lake Mead, a crucial reservoir along the Colorado, is nearing a critically low level because of the recent drought, so finding ways to use less of its dwindling water is a high priority for Uncle Sam.

Saving water during dry periods sounds sensible enough, but it does come with a significant catch. The utilities that provide most Americans’ drinking water and sewer service are facing major bills to repair or replace the nation’s aging water mains and other infrastructure. However, the trend toward conservation means less demand for the one basic product that water utilities sell.

Alan Roberson, director of federal relations at the American Water Works Association, says those two trends put water agencies in a bind. Aside from variations in the amount of electricity they consume and the amount of chemicals they buy to treat their water, utilities’ costs of operation are largely fixed. They have to pay to build or maintain the pipes and water treatment plants, even if customers are buying less water. Declining water sales mean lower revenue, even when infrastructure costs are rising.

That means that many water agencies will likely have to raise their rates to compensate for falling sales. And AWWA’s Roberson says many are “taking a hard look” at tacking on fixed monthly charges to water bills. More use of tiered pricing, with escalating rates for water usage above a certain threshold, is also a good bet. Utilities realize that customers don’t exactly welcome such pricing plans, Roberson says. But with so much of the nation’s water infrastructure in need of costly upgrades or replacement, finding sufficient revenue is critical.

So consumers should expect to pay more on their water bills over time, even if they are using less to cope with drought conditions. Conservation does pay off during dry spells, just not necessarily in the financial sense.