Land a Retail Job for the Holiday Season

Retailers will add hundreds of thousands of seasonal workers for the holidays. How to find a job—and possibly turn it into a permanent position. 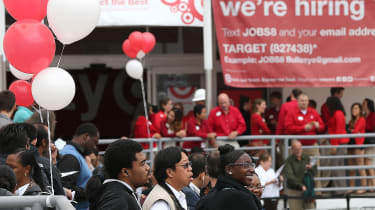 Question: I'd like to get a part-time job during the holiday season and earn some extra money. What is the best way to land a seasonal job—or is it too late to find one?

Answer: Retailers plan to hire more than 560,000 seasonal employees this year, and it's not too late to land a job. Some retailers started hiring in September, but many still plan to add more employees before the holiday rush. "Employers add on average 387,000 retail positions in November, so job seekers still have an opportunity to land a seasonal job," says John Challenger, CEO of Challenger, Gray & Christmas, an outplacement and executive coaching firm. "Seasonal retail hiring definitely dips by December, so job seekers should start looking now."

So far, retailers have hired slightly fewer seasonal workers than last year, according to a study by Challenger, Gray & Christmas. Challenger calls it the "Amazon effect," as more people order their gifts online. Still, some big retail companies (including Amazon) continue to hire thousands for the holiday season. For instance, the number of seasonal workers this year is expected to reach 120,000 at Amazon, 100,000 at Target and 80,000 at Macy's Inc.

Don't get discouraged if you don't have major retailers' stores in your area. You might still get hired. Many of Macy's seasonal jobs will be at its Macy's and Bloomingdale's stores, for example, but the company also plans to hire about 18,000 seasonal employees at its warehousing and shipping mega-centers in Goodyear, Ariz.; Cheshire, Conn.; Tulsa, Okla.; Portland, Tenn.; and Martinsburg, W.Va., as well as centers in a few other cities. It also will employ about 1,000 workers at its customer service centers in Mason, Ohio; Clearwater, Fla.; and Tempe, Ariz.

Online ordering has also led to an increase in jobs such as warehousing and transportation. "As more holiday shoppers make their purchases online, shipping companies like UPS and FedEx have enormous demand for seasonal workers," says Challenger. FedEx, for instance, plans to offer 50,000 seasonal jobs this year, and UPS will have as many as 95,000. UPS offers part-time and full-time seasonal jobs—primarily package handlers, drivers and driver-helpers—which can help you get your foot in the door for a permanent position after the holidays. Over the past three years, 35% of the people UPS hired for seasonal package handler jobs were hired permanently when the holidays were over.

You can find out about many seasonal jobs, especially with large employers, on their websites. Also check employment sites such as Monster.com and CareerBuilder.com, and look through Craigslist and local job-search or temp agencies. But Challenger recommends visiting employers in person when possible.

"Many retailers will not post their seasonal jobs online, particularly smaller mom-and-pop stores," he says. He recommends starting your search at restaurants and stores you frequently visit. "They are likely to recognize you as a regular, which will give you an advantage," he says. And don't be afraid to go back to an employer that didn't hire you earlier. "Their staffing needs may have changed, or they may have lost one or more seasonal workers," says Challenger.

Being able to work a flexible schedule can give you an edge. "The most challenging jobs to fill are those with unusual hours, such as overnight or early morning positions dedicated to receiving new shipments and restocking floors," he says. "Making yourself available to work whatever hours are needed will help you stand out to management, as well as make it more likely that you will be offered a permanent position after the holidays."