In an effort to help struggling taxpayers and small businesses, the IRS is trying to reduce the damage that collecting back taxes can inflict on personal and business finances.

The IRS says it will file fewer tax liens, which give the government legal claim to a taxpayer’s property for the amount of the unpaid taxes, and make it easier to remove the liens that are imposed from credit records once the debt has been settled. The IRS is also promising to expand its offer-in-compromise program, which allows individuals and small businesses that are truly unable to pay their back taxes to settle their debt for less than the amount owed.

“We are making fundamental changes to our lien systems and other collection tools that will help taxpayers and give them a fresh start,” says IRS Commissioner Doug Shulman. “People will have a better chance to stay current on their taxes and keep their financial house in order.”

National Taxpayer Advocate Nina Olson, an independent watchdog who works on behalf of taxpayers, called the announcement “a significant step in the right direction,” but she says the new policies don’t go far enough.

Olson says the IRS’s plan to double the threshold for triggering automatic tax liens from $5,000 to $10,000 of tax debt does not address the underlying problem of filing liens against taxpayers with little or no property. Instead of automatic liens, she says the IRS should evaluate liens on a case-by-case basis to determine the taxpayer’s financial situation and ability to pay.

Tax-lien notices are picked up by the three credit rating agencies and remain on a taxpayer’s credit report for seven years from the date a tax liability is resolved -- or longer if not resolved. “Increasingly, employers, mortgage lenders, landlords, car dealerships, auto insurance companies and credit card issuers utilize credit reports, so a tax lien has the potential to render someone unemployable, unable to obtain housing and unable to obtain car insurance or a credit card, at least at reasonable rates, for many years into the future,” Olson wrote in her latest annual report to Congress. “The IRS often collects nothing, yet it inflicts long-term harm on the taxpayer.”

She noted that the IRS filed more than one million tax liens in the 12 months ending September 30, 2010, a 550% increase from ten years earlier. “Absent data that show liens make a meaningful contribution to revenue collection, and especially in this economy, I find it unacceptable that the IRS continues to torment financially struggling taxpayers in this way,” she says.

Liens will now be withdrawn once taxes are paid in full. The IRS will also withdraw liens when taxpayers sign up for a direct debit installment agreement -- authorizing monthly payments to be deducted from their bank account -- as long as the unpaid tax debt is $25,000 or less. Liens will be withdrawn once it’s clear that the payments are going through.

Olson called the decision to provide lien withdrawal to taxpayers who enter into direct debit installment agreements “a prudent decision that should benefit taxpayers and the IRS.” Shulman noted that using direct debt payments lowers set-up fees to users and saves the government money by not having to send monthly payment notices.

The IRS is also expanding its offer-in-compromise program to cover more taxpayers. Under the new rules, individuals with annual incomes of up to $100,000 and tax debts of up to $50,000 can participant in the program that allows the IRS to settle the tax liability for less than the full amount owed. However, it is not clear whether doubling the eligibility levels from their previous limits of $50,000 of income and $25,000 of tax debt will improve the low rate at which the IRS accepts compromise offers. The number of accepted offers declined from nearly 39,000 in fiscal year 2001 to fewer than 11,000 in fiscal year 2009, according to the Taxpayer Advocate’s annual report. That same year, more than four million taxpayers were delinquent on their tax bills.

Although only a small fraction of tax debts are settled for pennies on the dollar, you would think it was a common occurrence if you believe the debt settlement firms’ ads on TV. Some high-profile firms, such as Roni Deutch, the self-proclaimed “Tax Lady,” have run afoul of state and federal regulators. Last summer, California attorney general (now governor) Jerry Brown sued Deutch for $34 million for claiming she has a 99% success rate. The suit claims she actually reduced the amount her clients owed in less than 10% of the cases.

In response to emailed questions from Kiplinger, Deutch said "nothing could be further from the truth. In the 20 year history of this law firm, not one advertisement has ever mentioned a 'success rate.'" Deutch said the percentage of her clients who negotiate an offer in compromise with the IRS to reduce their tax debt is consistently much higher than average

Help from the pros

Tax-settlement firms have their place. Few taxpayers are up to the task of navigating the lengthy offer-in-compromise process on their own or mounting a compelling defense against the IRS, which has been called the world’s largest collection agency. “You need someone who knows the offer-in-compromise process and who speaks the language,” says Peter Stephan, head of the Tax Resolution Institute, in Encino, Cal.

But be wary of promises that sound too good to be true. To check out a company’s reputation, type the firm’s name plus “complaint” in an Internet search engine. If you come up with pages and pages of complaints, run away, says Stephan. Also, check the firm’s Better Business Bureau rating and ask about the credentials of people who would handle your case. Ideally, you want the experience and expertise of tax attorneys, CPAs or enrolled agents.

“It’s very difficult to get an offer in compromise through, particularly for taxpayers who are relatively young, educated and who have future earning potential,” says Stephan. The IRS uses a strict formula to determine how much of a tax debt it can realistically recover, based on your current disposable income and assets that can be sold quickly to raise cash. The older the tax bill -- which can grow substantially with ever-accumulating interest and penalties -- and the older the taxpayer, the more likely the IRS will accept an offer for reduced payment, he says. The ideal candidate? Old, sick, poor and almost dead.

While you may have trouble paying the taxman, don’t expect a private tax-resolution company to represent you for free. Such firms want your money upfront before they’ll agree to take your case.

You can easily extend your tax return due date from July 15 to October 15…but should you?
Still Need to File Your Taxes? The Deadline Is July 15 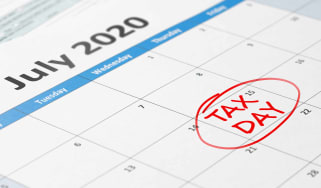 Still Need to File Your Taxes? The Deadline Is July 15

H&R Block's chief tax officer Kathy Pickering joins our Your Money's Worth podcast to offer advice for last-minute tax filers. Also, our hosts Ryan Er…
12 Tax Deadlines for July 15 (It's Not Just the Due Date for Your Tax Return)

Between due dates for paying estimated taxes, IRA or HSA contributions, and other deadlines, there's more to do by July 15 than just filing your feder…
7 Reasons to File a Tax Return Even If You Don't Have To (Hint: They're Due July 15!)

Although you might not be required to file a tax return, it might be wise to file one anyway. Here's a few reasons why.
Skip to ContentSkip to Footer