What’s the Right Price to Pay for Amazon's Stock?

The e-commerce giant’s shares continue to defy gravity even though consistent profit growth has long eluded the company. 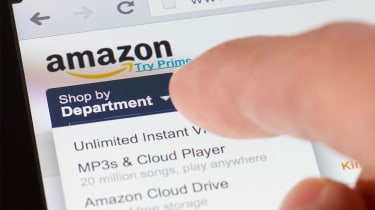 On February 9, during the stock market’s early-2016 slump, shares of Amazon.com (symbol AMZN) closed at $482.07. The next day Kiplinger’s recommended Amazon in Best FANG Stocks to Buy Before They Rebound. In just four months since the stock hit bottom, Amazon shares have surged 51%, to $726.64, giving the Internet retailing giant a market capitalization of $343 billion, or 55% more than the market cap of Wal-Mart Stores (WMT), the world’s largest brick-and-mortar chain, even though Wal-Mart’s sales are more than four times greater than Amazon’s.

Then again, you shouldn’t beat yourself up for passing on the February fire sale. After all, Amazon, a company that has lost money in two of the past four calendar years, is an enigma for investors. Although Amazon continues to grow rapidly—analysts expect revenues to expand at a 20% annual clip through 2018—does a company that has so much trouble keeping its bottom line in the black really deserve to trade at 110 times estimated year-ahead earnings?

Even in good years, Amazon isn’t particularly profitable. In 2015 the company’s operating margin (operating income dividend by revenue) was just 2.1%—and that paltry figure marked a five-year high. To some extent, low profit margins are inherent when running a retail business that competes aggressively on price. But Amazon’s margins also reflect its big-picture strategy of making enormous investments in order to quickly claim territory in the rapidly expanding landscapes of e-commerce and cloud computing. In 2014, for example, Amazon lost $0.52 a share as it made big expenditures on media content, new warehouses and Fire TV, Amazon’s box-top streaming device. That year the company also cut prices for its cloud-computing customers to win market share.

And yet, however much Amazon’s results may infuriate investors, its growth prospects never fail to dazzle. Plenty of growth potential certainly remains for the core retail business, where Amazon continues to win business away from traditional retailers. For example, Amazon Prime membership—a linchpin for future growth because Prime members spend much more than other customers—expanded by 51% in 2015 from the previous year. But the juiciest growth potential lies at Amazon Web Services (AWS), the cloud-computing business. “You can get starry-eyed” thinking about AWS’s growth prospects, says Justin White, manager of T. Rowe Price New America Growth, which at last report had 9% of its assets in Amazon shares.

Amazon is the undisputed market leader in cloud computing, in which sellers provide infrastructure or computing platforms as a service to customers, and customers access their data, storage and servers over the Internet. White says it can be difficult to get a grasp on exactly how large the market is or exactly how fast it’s growing, because many companies claim to offer cloud-computing services but instead really sell software or other ancillary products.

It could be that AWS is the profit machine that will finally propel the company to consistent earnings growth. There are also reasons to believe the core retail business is turning a corner on profitability, as investments in logistics and infrastructure start to pay off. Amazon has been investing in new fulfillment centers—so far in 2016 it has announced plans for 10 new centers in the U.S.—which reduces shipping costs. In March, Amazon inaugurated its own air fleet, with a deal to lease 20 Boeing 767s, a move that should further reduce shipping costs as the company is able to rely less on outside carriers such as United Parcel Service. And almost 50% of units sold on the Amazon marketplace now come from third parties, which should provide a boost as such sales are typically more profitable than in-house sales, says Victor Anthony, an analyst with Axiom Capital Management, an investment-banking firm based in New York City. Putting all those and other positive factors together, Anthony believes the core retail business could achieve double-digit-percentage profit margins within the next two years.

However, even if profits march steadily upward from now on, valuing the company on a price-earnings basis still looks Pollyannaish. Analysts on average expect earnings per share to grow by a sturdy 56% per year through 2018. But even comparing Amazon’s current stock price against estimated 2018 earnings of $16.66 per share yields a P/E ratio of 44. And of course, estimating earnings several years in advance is especially tricky for a company with a bottom line as hard to predict as Amazon’s.

Chief executive officer Jeff Bezos has said that instead of profits he prefers to focus on free cash flow, a measure of how much cash the business generates after accounting for capital expenditures, because “that’s something that investors can spend.” So, perhaps investors trying to value the company should do the same. R. J. Hottovy, an analyst with Morningstar, uses a projection of Amazon’s future free cash flow to arrive at a current fair value estimate of $800 per share. Hottovy’s price tag rests on the assumption that companywide operating margins could expand to 7.6% over the next five years—a more conservative, but possibly more realistic assessment than Anthony’s outlook—factoring in cost savings at the retail business and continued growth at AWS.

On Hottovy’s estimate Amazon is about 10% undervalued. Buying the stock at today’s price thus provides some margin of safety. But that margin could prove too thin if profits were to take a sudden nosedive, which might happen if Amazon were to turn on the spending spigot again. If that were to occur, frustrated investors could punish the stock.

On the other hand, in a few years $800 may look like a bargain. White believes the stock could reach $2,000 in the next four to five years as AWS grows to be even more valuable than the core retail business. That said, he doesn’t think the road to $2,000 will necessarily be a smooth one. “This is the type of stock that you buy and don’t think about,” White says. “Own it for the next 10 to 20 years.”

Bezos would agree. As he put it in a now-famous 1997 letter to shareholders, “It’s all about the long term.”