Bursting the Talk of a Stock-Market Bubble

There's good reason to believe that analysts' forecasts of a 12% increase in earnings next year are on the mark. 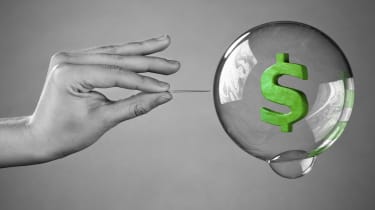 I would be wealthy if I had a dime for every time I heard the stock market is in a bubble. The term bubble should be reserved for assets trading for at least twice their true value, based on such fundamental factors as earnings, dividends and interest rates. For example, the U.S. stock market was just entering a bubble early in 2000, when Standard & Poor’s 500-stock index reached 31 times earnings, nearly twice its historical average. Tech stocks, many of which sported price-earnings ratios in the triple digits, were already in bubble territory.

By that standard, stocks today are definitely not in a bubble. It’s true that stock prices have more than tripled from the lows reached in March 2009. But those lows occurred in the worst bear market since the Great Depression. Today, stocks in the S&P 500 are selling for about 18 times estimated 2015 earnings. That’s only about 10% higher than the market’s median P/E of 16 since 1954, and it’s below the median if you exclude periods when interest rates were 8% or higher (all prices, P/Es and returns are as of June 5).

Except for the energy sector, which has seen earnings plunge (and its P/E rise) as a result of the falloff in the price of oil, each of the other nine industrial sectors of the S&P sell for 20 times earnings or less. The two largest sectors, financials and technology, account for more than 40% of S&P 500 earnings, and they are selling at P/Es of 14 and 17, respectively—below that of the S&P 500. Despite the strong run-up in technology stocks, that sector still looks particularly attractive. S&P estimates that earnings for companies in the S&P 500 Information Technology index will climb at an annualized rate of 13% over the next few years.

Earnings shortfall. It’s true that earnings growth for 2015 does not look great. Analysts, on average, expect earnings for companies in the S&P 500 to rise all of 0.5% in 2015, according to Thomson Reuters. The two major causes of weak earnings growth are the continuing strength of the dollar and the collapse in oil prices. More than 45% of the earnings of S&P 500 companies come from overseas, and measured in dollars, those numbers are depressed because the greenback has appreciated 21% against a basket of major foreign currencies since July 2014.

Before the sharp fall in energy prices, the sector contributed more than 10% of total S&P earnings. This year, the contribution from energy firms was negative in the first quarter and is expected to average just 3% for the entire year. In fact, S&P reports that although first-quarter S&P 500 earnings sank by 5.6% overall from year-ago levels, earnings would have been up a healthy 7.0% if the energy sector were excluded.

Energy losses were due to the write-down of oil reserves, the cost of shuttering wells and the sharp slowdown in exploration, all of which hit drillers and service providers hard. But there are signs that stability is returning: The rig count has stopped falling, and oil prices have recovered to about $58 a barrel. As a result, the factors that depressed earnings should dissipate later this year.

If oil prices and the dollar stabilize at their current levels, foreign sales will get a boost and earnings from the energy sector should rebound. Future earnings estimates often tend to be overly optimistic, but there’s good reason to believe that analysts’ forecasts of a 12% increase in earnings next year—as a result of moderate economic growth, more stable currency and oil markets, and continued share-buyback programs—are on the mark. Bottom line: Don’t let fearmongers deter you from buying stocks. The stock market is not in a bubble. Earnings and today’s extraordinarily low interest rates fully justify current trading levels.