What Does President-Elect Trump Mean for Your Portfolio?

Look past the post-election volatility and stay the course with a diversified portfolio. Also take advantage of buying opportunities. 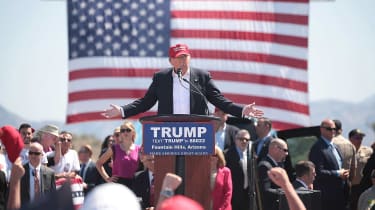 So the election is over, with President-elect Donald Trump the victor and both houses of Congress controlled by the Republican party. While stock futures were rocked overnight, the broad American indices closed in positive territory the next day.

First, stay calm. Whatever your politics, it's important to recognize that half of American voters are elated right now, and the other half are anxious. Fear has driven a lot of the news in this election cycle, and until there's more policy certainty and a degree of predictability, we'll likely see a continuation of volatility going forward.

That being said, generally speaking, it's better not to make too much out of post-election day jitters. Market moves after a national election aren't predictive of the state of the market going forward—in fact, they're no better than a coin toss.

But volatility also drives opportunity. I think we'll see some strength coming back into the markets and, in my prediction, we'll even go to new highs.

What can you do now?

The appropriate course of action for you depends on your personal financial situation, your risk profile and your time horizon. You might be better-served by staying the course in a diversified strategy or by strategically deploying cash.

Just keep in mind that no matter who you voted for, the American economy is resilient, diversified and strong. That makes for good long-term prospects, in my view. I always urge my clients not to ride the highs too high or the lows too low. Instead, it's important to step back from your emotions and have a plan.

I don't have a crystal ball, but in my 24 years as a wealth adviser, I've seen plenty of uncertainty and volatility before, and we'll see it again. The market climbs a wall of worry, which makes prudent planning all the more important.

Bradford Pine is a wealth adviser and president of the Garden City, NY-based Bradford Pine Wealth Group. He assists individuals to create wealth, simplify their lives and plan for retirement.

Brad Pine is a wealth adviser and president of Bradford Pine Wealth Group, based in Garden City, N.Y. BP Wealth Group assists individuals and entrepreneurs to create wealth, simplify their lives and plan for retirement. Honesty, integrity and reliability are the foundations of Pine's investment philosophy.