In the crowded new world of cryptocurrencies, there are over a thousand altcoin options to consider (if you are the risk-taking type, that is). Here are seven worth watching.

Whatever your position on Bitcoin and its supporting blockchain technology, it’s hard to deny its impact. Nearly 1,500 cryptocurrencies have emerged since the launch of the first Bitcoin block in January 2009. In 2017 the price of Bitcoin itself increased from less than $1,000 in January to more than $19,000 two weeks before Christmas. It’s been a wild ride.

This year, Bitcoin has already dipped well below the $10,000 mark. Many investors still consider this unduly inflated. They do, however, see huge potential for profiting on alternative coins (altcoins) that are still gaining momentum. The challenge is discovering which cryptocurrencies are legitimate, and which aren’t.

Altcoins: A Word of Warning

The cryptocurrency market is highly volatile, making price trends impossible to predict. It’s not uncommon to see daily fluctuations of 5% to 10%. And the impact of future regulations or potential bans in some countries is still unknown. 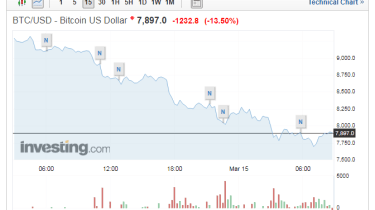 Example: Volatility of Ripple (XRP); Market caps and coin values were captured on 3/12/2018.

Warren Buffet forecasts that “cryptocurrencies, generally . . . will come to a bad ending.” Bitcoin and its altcoin sisters have no intrinsic value of their own, making them highly speculative, risky investments. Investors are understandably wary.

The cryptocurrency market is also flooded with scams and frauds. In fact, perhaps 95% of altcoin cryptocurrencies are scams, according to industry experts. According to Entrepreneur guest contributor Larry Johnson, Chief Strategy Officer at CyberSponse: “The cryptocurrency markets aren't just volatile, they are also extremely murky and riddled with fraud. … These markets have been plagued with cyber-attacks and scams that have cost investors millions of dollars.” Because cryptocurrencies are totally lacking any type of regulation, investing in them remains a risky business.

All in all, putting money into cryptocurrencies is a high-risk-reward game. You should never invest more than you can afford to lose.

As volatile, unregulated and prone to fraud as cryptocurrencies are, their ultimate value is still undetermined. Will Hutton of the Guardian describes Blockchain, the technology behind cryptocurrency, as a “foundational digital technology that rivals the internet in its potential for transformation.” The emergence of peer-to-peer (P2P) digital currencies also means we are now capable of storing and transferring money without a middleman. How these play out in the long term remains to be seen, but many investors consider it too early in cryptocurrency’s evolutionary lifecycle to completely disregard it.

Though not all-inclusive, here is a list of P2P digital currencies beyond Bitcoin that are worth learning about.

Though Ethereum went live in July of 2015, its market cap is still lagging Bitcoin’s (market cap: $166 billion), which is surprising considering that Ethereum is so much more sophisticated and has many more purposes than simply recording P2P payments.

Ethereum is the second most popular cryptocurrency today, and its ledger technology is gaining the trust of many investors. The Enterprise Ethereum Alliance, a coalition of Fortune 500 companies, start-ups, academics and technology vendors, is working with Ethereum experts to explore and expand upon Ethereum’s blockchain technology applications. Without going into too much detail, Ethereum's smart contract functionality allows it to run all kinds of decentralized applications, which is catching the attention of both businesses and investors.

The fourth largest cryptocurrency in the world, Ripple is still relatively unknown. Some people believe that could change. Ripple’s transaction speeds are faster, and their fees lower than Bitcoin. And as of mid-March, the price for one coin is about 83 cents, which means there is still a lot of room for growth. Additionally, unlike other cryptocurrencies, Ripple works like a centralized system with significant regulatory oversight.

The problem with Ripple, skeptics say, is that it is more suited for trading assets than making day-to-day transactions. Also, Ripple doesn’t have many trading platforms that offer the coin in direct exchange for fiat currency (real money). In most cases, coins are exchanged for, let's say, U.S. dollars for Bitcoin and, subsequently, Bitcoin for Ripple.

IOTA is the first cryptocurrency that does not rely on blockchain technology. There are no transaction fees, no miners and no blocks. But for the system to work, IOTA owners are required to provide their own processing power to validate two other random transactions for each transaction they make.

The benefit of this functionality is unlimited scalability. Transactions can be as small or as large as buyers want. Because there are no trading fees, microtransactions are practical. And the more people use IOTA, the faster transaction speeds become.

Since its peak in December 2017, IOTA has steadily declined to a mid-March value of $1.38. Some investors consider this an investment opportunity. 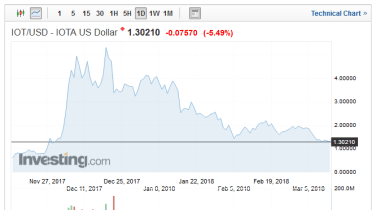 Litecoin was created by former Google employee Charlie Lee and released in October 2011. It's very similar to Bitcoin and, like Bitcoin, is used for making decentralized P2P transactions.

But there are differences. According to data from BitInfoCharts.com, Litecoin’s long-term average processing speed is around 2.5 minutes. Bitcoin’s long-term average is closer to 10 minutes, according to Blockchain.info. Litecoin also has a far simpler underlying code, which means it doesn't need as much time and energy to mine, resulting in less expensive transactions.

Its potential to become the new Bitcoin, the introduction of faster transaction speeds through its Lightning Network, and a general consensus among experts that it is currently undervalued make Litecoin an attractive investment option for many investors.

Developed by Omise, a multimillion-dollar fintech company, OmiseGO is an application based on Ethereum technology.

Its slogan, “Unbank the Banked” is a twist on the attempts of financial institutions to bank the “unbanked,” referring to the 2 billion adults worldwide who don't have access to formal financial services. Like many cryptocurrencies, OmiseGO wants to allow users to send, receive and store money through digital wallets without relying on third-party banks and bank accounts.

Vitalik Buterin, the founder of Ethereum and OmiseGO adviser, has tweeted that at this point, OmiseGO’s token model is his favorite Ethereum-based application. This optimism about its future is fueling investor interest in OmiseGo as a Bitcoin alternative. 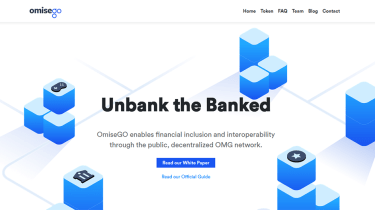 Monero is a digital currency focusing on privacy and anonymity. Like Bitcoin, it is a decentralized P2P cryptocurrency, but its emphasis on confidentiality is distinct. Transaction details are recorded but obfuscated so they can’t be traced to parties involved in a transaction. That means specifics about the size of a transaction, and information about its sender and receiver can never be leaked.

Of course, this makes Monero the ideal payment system for cybercriminals and drug lords, but it’s also appealing to people not wanting to be targeted by Internet marketers with every online transaction they make. Advocates, however, contend that most transactions are legitimate.

Monero's popularity has been increasing exponentially since its inception in 2014, especially since October 2017.

The last Bitcoin alternative I’ll introduce is NEO, also referred to as the “Ethereum of China.”

As you might have guessed, it originates from, well, China and had a mid-March value of $85.85. At the start of 2017, one NEO coin was worth a mere 14.5 cents. By year’s end the value had increased to approximately $72.02. The circulating supply is currently 65 million coins. The total supply is limited to 100 million coins.

One advantage of NEO is its focus on blockchain technology to develop decentralized apps and smart contracts. It also pays dividends.

On the other hand, its association with the Chinese government makes it hard to gauge where NEO is headed. Additionally, since NEO acts as a share of the blockchain, it's not divisible, which means you can only own full coins. Depending on how the value of NEO develops in the future, this can lead to problems with scaling, when prices get too high.

In short, Bitcoin has spawned a new breed of digital currency that remains unregulated, unpredictable and, mostly, unsafe. But within that murky pool of cryptocurrencies are a handful of altcoins worth watching.

Marguerita M. Cheng is the Chief Executive Officer at Blue Ocean Global Wealth. She is a CFP® professional, a Chartered Retirement Planning Counselor℠, Retirement Income Certified Professional and a Certified Divorce Financial Analyst. She helps educate the public, policymakers and media about the benefits of competent, ethical financial planning.