Using a 529 Plan to Pay for Private School

Q. Can I use money in my daughter’s 529 college-savings plan to pay her private elementary school tuition? 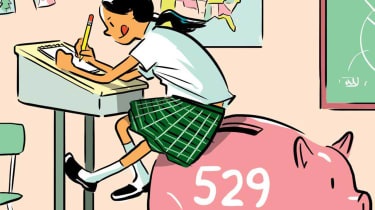 A. Yes, The new federal tax law allows families to withdraw up to $10,000 a year from a beneficiary’s 529 account to pay tuition for kindergarten through 12th grade without federal taxes or penalties.

Even so, you shouldn’t rush into this decision without checking with your state’s plan—or a tax professional. Laws in many states have yet to catch up with the federal legislation passed in late December, and several states have signaled that they don’t plan to conform. If your state treats a withdrawal for your daughter’s tuition as a nonqualified distribution, you could owe state income taxes on a portion of the money withdrawn. And raiding your college savings to pay private school tuition may not be the best financial move.

Catching up with federal law. State-sponsored 529 plans were created more than 20 years ago to help families saving for college keep up with rapidly rising tuition. Money invested in these plans grows tax-deferred and can be withdrawn tax-free for a wide range of college expenses. Thirty-four states plus the District of Columbia also offer a tax deduction or credit to residents, usually for contributing to their home-state plan. Up until now, if you used the money for anything except higher education, the earnings on the withdrawals would be subject to income taxes and a 10% penalty.

States were caught off-guard when Congress expanded the use of 529 money. When states drew up legislation years ago to create their 529 plans, many specifically stated that the money was to be used for “higher education,” says Susie Bauer, 529 manager with the Baird investment firm in Milwaukee. Now they must change their laws to reflect that the accounts can be used for primary and secondary education, too.

As of mid July, 34 states said they will follow the new federal law, says Bauer. Seven states—California, Hawaii, Michigan, Montana, New Jersey, Oregon and Vermont—are not conforming. It’s unclear how the rest will treat withdrawals for K–12 tuition, Bauer says, and some states may seek to reclaim old tax deductions on contributions if the money is withdrawn for K–12 tuition.

Even if your state permits tax-free K–12 withdrawals, it may not be a money-wise move. The advantage of a 529 college-savings plan is that you can aggressively invest in stocks, which have high growth potential, when your child is young and there’s time for the earnings to compound. Dipping into 529 savings early to pay tuition, particularly if you don’t replace the funds, could leave you with a shortfall when much larger college bills come due. You could end up borrowing money from your retirement savings to pay for college, says Jason Lina, a certified financial planner in Alpharetta, Ga.

But if you’ve already salted away enough for college in a 529—or can afford to continue to save for college while contributing money for K–12 tuition bills, too—using the account for the early school years can be a smart tax move if your state offers a tax break. For example, a parent could deposit the current year’s elementary school tuition in a 529, then immediately withdraw the money to pay the school bill—and still take the tax deduction. That’s essentially a discount on tuition. This strategy might not be so easy in Michigan, Minnesota, Montana or Wisconsin, which limit tax deductions if residents immediately withdraw contributions.

Despite the tensions brought on by the pandemic, a number of couples are waiting right now, with good reason.
18 Things You Should Know Before Shopping at Trader Joe's