Skip to headerSkip to main contentSkip to footer
Car Rankings

The buzz word among carmakers is &quot;electric,&quot; but will consumers buy pricey battery-operated vehicles?

Compared with the revved up, horsepower-driven shows of recent years, the Detroit Auto Show has downshifted this year -- to the eerily quiet whir of electric motors.

After a brutal year of $4-a-gallon gas, recession, credit crisis, and the worst annual sales since 1992, the show is subdued and on a budget, with a sheepish nod toward a greener, cleaner future.

We’re green (really!) The future of the automobile industry appears to be tied to the nation's electrical grid, judging from what I saw at the 2009 media preview. Chrysler made a splash with four electric versions of current models and a striking concept, the 200C EV. Ford introduced its e-vehicles. GM continued to hawk the Volt. The foreign carmakers pushed EVs, too.

Hybrids, plug-in or not, are hot -- with concepts like the Lexus HS 250h, BMW Concept 7 Series Active Hybrid and, of course, the third-generation Toyota Prius. Audi and VW continue to push their concept of green, with diesel versions of the A3, Q7, Touareg and Rabbit and a VW concept roadster called BlueSport.

Most of the prototypes won't be available for another year or two. Many are being tested in corporate fleets before they go into production for the mass market.

Plus, the lithium-ion batteries used in most of the models are pricey and will continue to be until they are manufactured in volume. But car buyers are notoriously cheap when it comes to automotive technologies: If gasoline stays cheap, they won't pony up for expensive electric vehicles.

Production-worthy prototypes So while I’m not quite sold on the "don’t worry, we’re good" message, I do think there are plenty of great vehicles that will eventually see production. Here are a few of my favorites from the show.

Honda was characteristically reticent with the introduction of its new Insight hybrid. No frills, no fanfare -- no event, period. The Insight is estimated to get 41 miles per gallon in combined fuel economy, at a price below Toyota's.

MOST FUN Kia built on the excitement of the 2010 Soul compact SUV with a ragtop concept called the Soul-ster. Painted in school-bus yellow, it looked sun-drenched and designed for California roads. The four-seater offers integrated roll bars that support the canvas top, which is operated by elbow grease.

MOST DRAMATIC DEBUT The reveal of the new Mini Cooper Convertible takes the cake. Built on the slogan "Always Open," the car was introduced by driving through a wall of faux ice to the sounds of howling winds by a snow covered driver and passenger. The car has a timer to keep track of how long you drive with the top down.

MOST GREEN Lexus introduced the nameplate’s first dedicated hybrid, the HS 250h for 2010. While mileage numbers haven’t been finalized, it’s expected to offer the best combined mpg of any luxury vehicle in the U.S. (city mileage should be higher than that of the Smart fortwo). But it gets my vote not for mileage but for construction. Lexus used plant-based eco plastics in 30% of the interior and cargo spaces.

BEST MPG Toyota introduced the third-generation Prius. The more aerodynamic Prius manages to get better mileage -- 50 mpg in combined city and highway driving, up from the first-gen’s 41 -- with a more powerful engine and 5 cubic feet of extra interior room.

MOST UNEXPECTED Volvo is a nameplate associated with stability and safety, as well as boxy sedateness. So when the company introduced the elegant, refined S60 concept, plenty of heads turned. The sweeping, racetrack-inspired lines and glowing, blue-hued interior portend a more exciting Volvo. 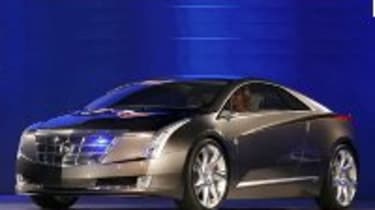 BEST LOOKING ECOMOBILE The Cadillac Converj concept is essentially a Volt wrapped in smooth Caddy style. You get 40 miles of driving on electric power, but in a coupe with sharp lines and a low stance.

Please be nice to us The show opens to the public January 17 to 25, and here's hoping Michiganders flock to Detroit's Cobo Hall en masse. But during press-preview days, there were telltale signs of disinterest, if not despair: a plethora of snow-covered, unrented cars in the airport rental lots, readily available parking near the show, and an absense of bling in the press introductions.

The Detroit carmakers are showing a stiff upper lip in the face of U.S. consumers who, in many ways, wouldn't blanch if the American car brands quietly faded away. GM held the first press conference of the show and featured a parade of 17 new and upcoming vehicles with the rally route lined by a pep-squad of employees, waving signs reading “HERE TO STAY.”

Odds are pretty good that GM will stick around, since the bailout money has started to flow. But by the next Detroit show, the industry will have done a lot more downsizing.

Want to spend less on transportation? Step 1 is a car that’s used, but not used up.
Protecting Your Car During COVID-19