Driverless, Folding Cars Are in the Works

With autos that drive themselves, baby boomers may be able to keep their wheels longer.

Leave the driving -- to your car? General Motors' prototype EN-V (Electric Networked Vehicle) promises to let you do just that.

No place to park? The all-electric CityCar, developed by the Massachusetts Institute of Technology, can help out by folding its eight-foot length into a more compact five feet for parking, allowing it to fit in teeny urban spots.

By the end of the decade, both of these well-advanced concepts may be off the drawing board and on the nation's streets and highways.

The EN-V's onboard computers will be programmed to take voice commands from the "driver." The computers will then communicate with electronic systems built into roadways so the vehicle can navigate on its own while avoiding hitting other objects.

The car will come equipped with an all-electric, rechargeable power system, eliminating the need for bulky engine, transmission and braking systems. In fact, it won't resemble today's cars much at all. At just a third of the length and weight of today's average car, it'll look more like a bubble or pod.

The car's designers figure it will catch on with aging baby boomers who will want to stay mobile as they get older.

The possibilities with such a vehicle are mind boggling. For example, Dan Flores, a GM spokesman, says EN-V owners will be able to command the cars to drop them off in front of, say, a restaurant. The cars will then park themselves and retrieve their occupants upon command.

Though others, including Google Inc. and Carnegie-Mellon University, are working on electronics for autonomous vehicles, GM is the only entity that’s likely to actually produce commercial models.

MIT's CityCar is a horse of a different color, so to speak. It will require hands-on driving, so motorists will have to keep their eyes on the road. But its shape-altering feature will be a boon to city dwellers, for whom finding a parking space is a frequent challenge.

MIT, which has a working prototype of the folding car, likely will license its technology to a car builder, though it’s too early to say which automakers might be interested.

Development of batteries that are critical to powering the EN-V and CityCar is gaining ground fast. A123 Systems, based in Watertown, Mass., is ramping up lithium battery production at its Michigan plant and will turn out 40,000 or so such batteries a year by mid- to late 2011. Other battery makers, including Johnson Controls-Saft, Milwaukee, and several Japanese and South Korean companies, aren't far behind.

Much of the technology needed to put advanced smart cars on the roads exists today. What's lagging is the infrastructure. Mass-scale manufacturing and deployment of next generation vehicles will have to wait for the needed installation of public recharging stations, embedded sensors and other electronics in roadways, and so on -- work that will take the better part of the decade, at least. 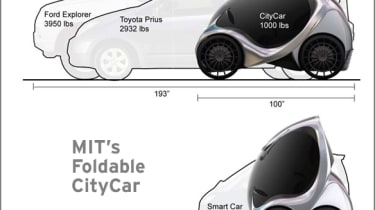 Housecats may be known for their aloofness and low-maintenance attitude, but they're not cheap. Here's what you can expect to spend if you plan on ado…
The Ultimate Guide to Amazon Prime Day 2020: When It Starts, the Best and Worst Deals, Competing Events, More

In a first, the giant retailer has pushed Amazon Prime Day this year from July to October, effectively launching the holiday shopping season weeks ear…
High-Tech Aids for Aging in Place

Apple Watch and other technology provides fast feedback, comfort for older users, and a powerful assist for caregivers.
The 25 Cheapest U.S. Cities to Live In