What the Marriage Equality Decision Means for Social Security Benefits

Retirees in these 13 states will prosper from the Supreme Court ruling. 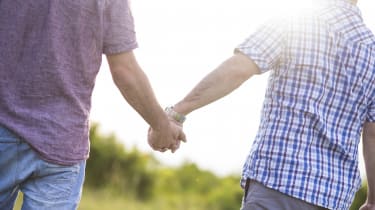 The Supreme Court’s landmark finding that same-sex couples have a constitutional right to marry will mean a financial gain for such couples who live in the 13 states that allowed only a man and a woman to wed.

The biggest immediate effect, beyond the sweeping civil rights implications, is to put married gay and lesbian couples in all 50 states on equal footing in terms of Social Security and veterans’ benefits.

It will also make it easier and less costly for companies with business in multiple states to manage employee benefits, and it will free workers to take jobs anywhere.

The 5-4 ruling cleared the way for gays and lesbians to marry in the 13 states that had resisted the move — Arkansas, Georgia, Kentucky, Louisiana, Michigan, Mississippi, Missouri, Nebraska, North Dakota, Ohio, South Dakota, Tennessee and Texas.

The federal government for the most part already allowed equal benefits for married same-sex couples, based on the state where their wedding took place. But Social Security is based, by law, on the state of residence. So couples in the 13 states that banned such marriages didn’t qualify for benefits that were available to residents of other states.

For instance, a gay couple who lived in Nebraska after being married in California, would have been ineligible for the spousal benefit and death benefits paid by Social Security. The spousal benefit allows a lower-paid spouse to collect his or her own check or half of the top breadwinner’s check, whichever is greater. And a surviving spouse can claim the other person’s full benefit in place of his or her own if the check is bigger. The difference could amount to hundreds of dollars a month.

Veterans’ benefits are also based on where a couple lives. Same sex spouses are denied spousal benefits, including survivor and burial benefits, if they live in states that don’t allow gay marriage.

Uniformity in state marriage laws will save employers a bundle — about $1.3 billion, according to one analysis. Because same-sex couples have not had equal access to benefits or equal treatment in taxation, employers have had to set up and manage separate systems to manage benefits and calculate taxes.

One example: In states that didn’t recognize the marriages, employees were taxed on the value of health benefits for same-sex spouses, but workers with spouses of the opposite sex were not taxed. Many companies increased the pay for married same-sex employees to make up for the difference in treatment. Having two sets of rules not only drove up benefit costs but also caused firms to pay extra to educate payroll administrators and human resources staffers.

Without such policies, companies said they would have trouble attracting and retaining top talent. Coca-Cola, Johnson & Johnson and Apple were among the 379 firms that wrote the court in favor of nationwide allowance of same-sex marriage.

Firms in states that didn’t allow same sex marriage, and that provide health care benefits to spouses of the opposite sex, will be required to provide those benefits to same sex spouses as well.

There are political ramifications, too. Conservative Republicans are likely to make support for a constitutional amendment to wipe out the ruling a key issue, especially in the first-in-the-nation Iowa caucuses and the early South Carolina primary.

The amendment is a long shot and the process would take years, perhaps decades, to play out. But because hard-core social conservatives dominate the GOP electorate in those early states, their views will help narrow the Republican field in 2016.

The April 15 deadline for filing your 2019 federal income tax return (and paying taxes) has been moved back...but the new due date is approaching fast…
How to Get an Extension for Filing Your Tax Return

If you can't wrap up your tax return by the July 15 deadline, it's easy to buy yourself more time.
Skip to ContentSkip to Footer