How to Invest After You Retire

Follow our guide and your nest egg will last a lifetime. 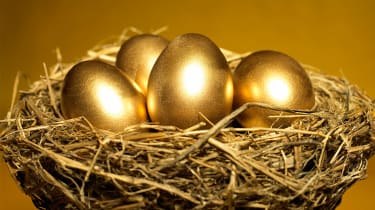 You just turned 66, had a blast at the office party in your honor, said goodbye to the water-cooler crowd and are heading toward that great unknown called retirement. But now you’ve got a bad case of the willies. You’re wondering whether your money will last as long as you do. After all, you don’t want to run so low on cash that you’re forced to pin on a name tag and call out “Welcome to Walmart” a decade from now.

So how do you approach your portfolio now that you’re no longer collecting a paycheck? When it comes to investing in retirement, experts say there is one guiding principle: You can’t earn back your nest egg without a steady paycheck. So you’d better make sure you’re investing wisely and safely. “When you are still working and the investment markets don’t do what you hope they will, you always have the option of working longer and postponing retirement,” says Anthony Webb, senior economist at the Center for Retirement Research at Boston College. “Once you have retired, you have lost that margin of adjustment.”

To be sure, unless you retired on the spur of the moment or grossly neglected your investments, you shouldn’t have to revamp your portfolio drastically. Say you plan to withdraw 4% of your total assets in the first year of retirement and to adjust the amount by the rate of inflation in the following years. Such a withdrawal rate is unlikely to deplete your savings over a 30-year retirement. All you need to do is review your investments and determine whether your portfolio properly balances your need for safety, growth and income in a way that will keep you both physically and emotionally comfortable.

How do you make that determination? To start, take a look at three factors: the sources of your retirement income, the flexibility of your budget, and your ability to tolerate risk on both a practical and psychological basis. From there, you can structure a portfolio based on one of two popular asset-allocation strategies that place a high priority on safety: the bucket plan or the cover the basics approach.

The bucket formula essentially splits your savings into three pieces, which will be used in the early, middle and late stages of retirement. The cover-the-basics approach aims to match your fixed expenses with fixed sources of income, such as Social Security, pensions and immediate annuities. The rest of your assets are invested to provide income for non-necessities, such as travel and entertainment, which presumably can be postponed during a stock market downturn.

But both approaches have the same starting point: comparing your regular sources of income to monthly expenses. This step is aimed at calculating the gap between income and expenses that needs to be covered by savings. For instance, if a couple need $6,000 a month to meet day-to-day expenses and they receive $4,000 a month from Social Security at 66—the age that Uncle Sam considers full retirement age for people born between 1943 and 1954—their gap is $2,000 a month.

Advocates of the bucket approach would encourage this couple to start by putting between $48,000 and $72,000 in short-term reserves, such as bank accounts, money market funds and certificates of deposit. This money will earn little, if anything; the aim is simply to finance two to three years of spending. Should stocks tank during that period, the couple can live off their cash holdings and won’t need to unload stocks or stock funds at unfavorable prices. When stocks recover, the couple can strategically refill the cash bucket so that they always have enough money to handle a year or two of bills, says Doug Duerr, a certified public accountant in Montville, N.J.

Retirement expert Steve Vernon prefers the cover-the-basics approach. Instead of accumulating a cash hoard to cover the gap between income and costs, retirees should consider the portion of the gap that is for fixed (that is, non-discretionary) expenses, suggests Vernon, a research scholar at the Stanford Center on Longevity, at Stanford University. He argues that retirees should use an immediate annuity to cover just that portion of the gap.

The type of immediate annuity Vernon recommends works much like a pension. You invest a lump sum with an insurance company, and the insurer pays the money back to you, with interest, guaranteeing that the monthly payments will last as long as you do but not a second longer. This approach allows you to cover all of your fixed expenses. And that permits you to take more risk with your remaining assets, Vernon says.

Unfortunately, lifetime annuities are not especially attractive nowadays. That’s because their returns are based on two factors: current interest rates and the expected duration of the monthly payments. With rates scraping bottom and lifespans lengthening, a $100,000 investment in a joint-life immediate annuity will return $475 per month to a 66-year-old couple who want payments to last for both of their lifetimes, according to ImmediateAnnuities.com. If they wanted the annuity payments to adjust for inflation, the monthly payments in the early years would be lower or the up-front cost would be higher.

One way to avoid locking in too much money at low rates is to buy an immediate annuity now with a portion of your savings and invest more in annuities every few years. Payouts will be higher because you’ll be older; they’ll also increase if interest rates rise. Another option is a deferred-income annuity, also called longevity insurance: You get heftier payments because you pick a date down the road to begin receiving them (see Plan for a Long Life When Saving for Retirement).

Our hypothetical couple could also delay claiming Social Security, which offers one of the best annuity deals around. After you reach full retirement age, Social Security hikes monthly payouts by 8% for each year you hold off on claiming benefits up to age 70. How does that work for our hypothetical couple with $6,000 in monthly expenses to cover? Assuming that Social Security pays them each $2,000 a month at age 66, the monthly benefit for each would be $2,751 at age 70 if they didn’t claim payments until that age. (For more on when to claim benefits, see Best Strategies to Boost Your Social Security Benefits.)

Of course, delaying retirement isn’t for everyone. Some people don’t want to keep working that long, and if the couple didn’t claim Social Security until age 70, they’d have to cover 100% of their $6,000 in monthly expenses from savings and any pensions. But in return for making an “investment” of a little more than $192,000—the $4,000 in delayed monthly benefits multiplied by 48 months, plus cost-of-living adjustments to those payments—they would receive enough added benefits to cover almost all of the gap between income and expenses for the rest of their lives.

As for how to invest the rest of your nest egg, many experts believe that retirees can devote more of their savings to stocks than they think. That’s partly because both the bucket and cover-the-basics approaches protect retirees from short-term stock market downturns. And when you have time to wait out declines, you can tolerate more stock market volatility.

The right mix depends on your age, says Catherine Gordon, a strategist at Vanguard Group. At age 66, Gordon says, you can safely invest half of your assets in stocks and the rest in bonds and cash. The stock portion of the portfolio should be divided between domestic and foreign stocks. The bond allocation should include foreign and U.S. debt and be spread among different maturities, though it shouldn’t go overboard on long-term bonds.

A look at Vanguard’s target-date retirement funds—all-in-one funds that become more conservative as you approach the target date—gives you a good idea of the fund giant’s ideal allocations. Vanguard Target Retirement 2015 (symbol VTXVX), which is designed for an investor on the cusp of retirement, had 51% of its portfolio in stocks and 45% in bonds at last report.

Some advisers advocate a more-aggressive tack. Nick Ventura, a money manager in Ewing, N.J., suggests that retirees hold more in stocks and less in bonds than the amounts suggested by Vanguard’s target funds. He says that in today’s low-interest-rate environment, retirees should put special emphasis on dividend-paying stocks, including real estate investment trusts. He also thinks investors should keep some money in commodity funds to protect against inflation.

Stanford’s Vernon has a simpler approach. Because he assumes that retirees have covered 100% of their fixed expenses through Social Security, annuities and pensions, he suggests that they invest the rest of their money in a traditional balanced fund, which typically has about two-thirds of its assets in stocks and the rest in bonds. Solid choices include Dodge & Cox Balanced (DODBX), FPA Crescent (FPACX) and Vanguard Wellington (VWELX). Crescent, a member of the Kiplinger 25, recently held a modest 48% of its assets in stocks.

There’s no perfect formula, adds Boston College’s Webb. Ultimately, you have to figure out how much risk you can tolerate and then create a mix of stocks, bonds and cash that feels comfortable. “You may not be totally right,” says Webb, “but you also will never be totally wrong.”