Get Your Portfolio Ready for Volatility - And for When It Ends

It is never too late to protect against big market swings 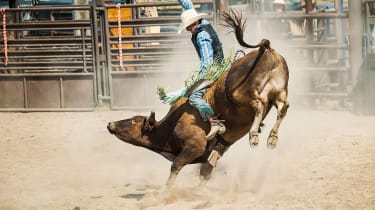 The dramatic rise in volatility in February and swift 10% correction in stock prices caught many investors flat-footed. After all, the Standard & Poor’s 500-stock index went more than a year without a 5% pullback, so it was shocking to see a 10% correction in just nine trading days.

Aside from causing stomach-churning drops – and rallies – it drove home the point that investors always need a plan to protect themselves. It is always smart and never too late to make certain adjustments for when the good times eventually end.

Even now, after a snap-back rally, it is not too late to think about what should be done to protect against more downside volatility, as well as prepare for a continued bullish reversal that sends stocks higher.

Rather than selling sooner, when the bear market became apparent, they sat tight hoping for the rebound that never came, then finally threw in the towel when it was too late – and at the worst possible time.

Even worse, they got spooked and never came back into the stock market. They sat on the sidelines as the index gained 331% – or more than a quadruple – into the January 2018 peak.

Were there signs in 2007 that the market was so weak? You bet there were. And there were signs of weakness before the market swooned this year, too. On Feb. 1, for instance, Financial Times reported that inflows to equity mutual funds hit record highs of about $100 billion. Investors seemed to chase the market higher with abandon.

There are two points of interest here. First, it was the best January performance since 1987 – the year of the Black Monday crash. And second, this statistic told us that individual investors were finally back after missing the first nine years of one of the most powerful bull markets in history. They were piling into stocks after the bull market became a senior citizen.

Such outrageously optimistic sentiment in action (buying stocks) and in talk (surveys of investor sentiment recording extreme bullishness) should trigger alarms that things are not a good as they look – or feel.

But that’s in the rear-view mirror. Let’s talk about what investors can and should do right now to put their portfolios in sync with the market, even as the market seems to be off the rails.

How to Set It and Forget It

Without looking backward to see what “should have” been done, most financial advisors offer similar recommendations for their clients. They look to build portfolios based on risk tolerance, life stage and specific needs.

Charles Massimo, CEO of CJM Wealth Management in suburban New York, says, “Once established, the portfolio should never really change based on market conditions. It should only change based on real changes in client lives.”

He specifically talked about a client nearing retirement and how they already accounted for any kind of choppiness by putting a decent amount of money in short-term Treasuries to cover at least two years’ worth of retirement income.

What it really boils down to is understanding that any one or two years can be bad. High volatility or short-term losses are no excuse for messing with a well-constructed plan.

Setting it and forgetting it is not everyone’s cup of tea. Some investors do not want to sail into bear markets with the same plans they have in bull markets. And even in corrections, you can take steps to prevent getting dinged too badly, no matter what your investing time horizon might be.

In March 2009, the American Association of Individual Investors survey recorded its record high for bearish sentiment at 70.3%. Compare that to its long-term average of 30.3%. Clearly, there was panic in the air, and it turned out to be an excellent time to increase exposure to stocks. Why? Because such extreme bearishness suggests all the selling has been done.

This is just one method smart investors use to find important turning points.

Even in corrections – such as the 9.2% decline that the Dow Jones Industrial Average suffered in September and October 2014, thanks to the Ebola virus scare – we can look at such statistics to see the buying opportunity.

At no time should you make a decision to be fully in or fully out of the market. Only tweak your portfolio to take advantage of major opportunities or avoid major risks when they appear.

Shore Up Your Portfolio’s Defense

When the market seems to be in an untenable situation – as it was in January, with excessively bullish sentiment, overly optimistic valuations and technical factors that were signaling warnings – it is time to reduce risk exposure. Here are a few ways to do that:

Prune laggards. Not all stocks go straight up with the market. Studies have shown that weak stocks in bull markets tend to lead the downside in weak markets. Conversely, stocks that do hold up better during the corrections tend to come out of the gate leading the market when conditions improve. This also gives you cash at the ready to redeploy when the market looks more realistic. Note: This isn’t timing the market; it’s just shedding losers.

Shift to conservative sectors. Typically, technology, consumer discretionary and small stocks lead during rallies. Defensive sectors, such as consumer staples and utilities, tend to hold up better in weak markets.

The strategy here is to take partial profits on stocks and groups that have done exceptionally well and are now stretched out technically and fundamentally. Take some money off the table and let the rest ride. You can keep it in cash or move some of it into defensive areas that have participated in the rally but do not look quite so overvalued.

Set stops. A stop is simply an explicit order left with your broker, or a mental note you monitor yourself, to sell a stock if it falls to a certain price. If you set stops properly, you will allow your stocks to wiggle around naturally and only sell when it becomes clear that the stock is in a new falling trend.

It is not perfect, thanks to changes in volatility levels, but it does set a maximum loss you can experience while keeping you invested during most market conditions. Periodically review your stops and raise them with the market, so you can continue to lock in gains and minimize downside risk.

If you do get stopped out, you will have more cash at the ready for the next bullish phase.

Shore Up Your Portfolio’s Offense

Prune losers. This is just as much an offensive strategy as it is a defensive one. Losing stocks are not going to miraculously start to lead the market when the time comes for the bulls to stampede. There are exceptions, such as stocks that have already been down and out and finally put changes in place in their businesses. But for the most part, laggards tend to keep lagging.

Create a shopping list of great stocks to buy if they go on sale. This is a great strategy to take advantage of temporary weakness top performers you wished already owned. If Amazon.com (AMZN) fell 20% from its peak, would it still be the game-changing stock it was last year? Wouldn’t you want Facebook (FB) if it fell to a 52-week low? After all, that would be a 30% decline.

Even stocks that haven’t looked so great have their price. What about International Business Machines (IBM) if it fell 25%? Even General Electric (GE) – which has lost half its value over the past 13 months amid various operational issues and a dividend cut – could at some point become oversold.

If you understand what is driving the economy – long-term trends – then you can find stocks at fire sale prices.

This Is Not Market Timing

When you identify these major turning points, the actions you take to perhaps lighten up on losing stocks or hold off on that purchase of the hottest tech stock can save you some headaches – and losses.

Again, this is not a call to sell everything when the market looks toppy, or back up the truck to buy when it looks that the correction is over.

Rather, it is a set of conservative actions you can take to ease back on the gas pedal or step back on it when the market makes it clear that something is different.

Bonds can be more complex than stocks, but it's not hard to become a knowledgeable fixed-income investor.
A Step-by-Step Guide to Being an Estate Executor

We spend a lot of time worrying about running out of cash in retirement. But you might be surprised to see some of the things you'll find yourself spe…
Best Bond Funds for Every Need

In a changing market, it’s important to remember why we hold bonds in the first place.
Skip to ContentSkip to Footer