How to Negotiate a Car Lease

Understand the language of leasing and shop around to get the best terms. 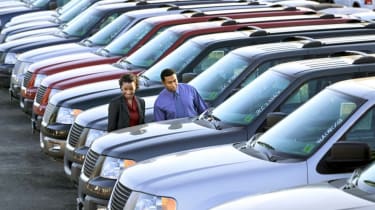 The leasing contract will refer to the "capitalized cost" of the vehicle. That means price, so set a target price as described in Buying a Car? First, Do Your Homework. Some new-car guides, including Kiplinger's annual guide, provide invoice prices and suggest target prices. Kiplinger's also gives expected resale values after three and five years, which can be especially helpful in anticipating the residual value of the vehicle you want to lease. Arm yourself with these figures before you start bargaining and you'll have a better idea whether you have much leeway to negotiate a residual value more favorable to you.

Remember, what you want is the lowest possible capitalized cost and the highest possible residual value. As a leaser, you're paying the difference.

Other things being equal, the best car to lease is the one that retains more of its value over the term of the lease. If two cars cost the same, you'll pay less to lease the one that depreciates less.

Should you make a down payment? Not if you can avoid it. Though putting more money down will lower your monthly lease payment, why pay the money up front when one of the chief attractions of a lease is that it keeps your up-front outlay to a minimum?

Can you get a better deal if you wait until the end of the model year? This often works for buyers because dealers want to clear off their lots to make room for the new models. But when you're leasing, you're looking for the most favorable relationship between the cost of the car and its residual value. (Low cost, high residual, remember?) And a car that leaves the lot at the end of the model year is likely to depreciate faster than a car that begins its leased life at the beginning of the year. As soon as the new cars hit the showroom, you're driving last year's model.

The best leasing deals are usually offered by auto manufacturers that are trying to move a particular model. They can lower the cost of the lease by either reducing the cost of the car or offering a low financing rate . You'll see lots of great deals advertised in newspapers and on television, but remember that the terms you see there apply only to the specific model being advertised. As with everything else, it pays to shop around.

Traps to Look Out For

Check the lease terms for a capitalized cost reduction fee. This is simply another way of asking for a down payment.

Watch out for excess-mileage charges. Dealers want to maximize the resale value of the car when the lease is up, so they limit the number of miles you can drive each year without paying extra. Some leases allow 15,000 miles, but more manufacturers are trimming the allowance to only 10,000 or 12,000 miles per year. If you think you're likely to exceed the allowance, then negotiate for additional miles up front. This can save you a few cents per mile over the end-of-lease mileage charge.

Don't take a longer lease term than you want in a misguided attempt to lower the monthly payments. If you need to get out of the lease before its term is up, you will almost certainly have to pay a steep charge for early termination. Exactly how steep will be spelled out in the contract.