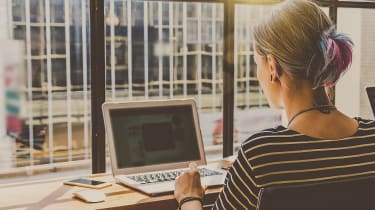 Question: I had a frustrating experience at work. Can I crowdsource advice on Twitter or Facebook if I don’t name names?

Answer: No matter how militant you are about privacy settings, anything you share on social media can be passed on verbally or captured in a screenshot. Some of your followers are likely to know where you work (or are coworkers), and you could inadvertently reveal sensitive information about your company or fellow workers. But even if your complaints never trickle back to the office, “your readers notice your negativity or griping, and this creates a poor impression,” says Daniel Post Senning, spokesman at the Emily Post Institute.

Sharing positive tidbits about work on social media is safer but still dicey. “With every post, ask yourself, ‘Why am I posting this?’ ” says Diane Gottsman, founder of the Protocol School of Texas. For example, that hilarious fumble a colleague made during her presentation is probably not as funny to people who weren’t in the room. Although it’s fine to promote your work on occasion, gushing about a raise can appear boastful. If you’re tempted to share photos from, say, an office party, ask permission before tagging anyone in group photos.

I’d rather not accept my supervisor’s Facebook friend request. How do I tactfully deflect her?

You never need to justify why you’re deleting someone’s friend request because it’s largely understood that people manage their social media accounts in different ways. But if you are concerned about a supervisor feeling rejected, you can casually explain that you restrict your Facebook circle to friends and family. Or suggest connecting on LinkedIn instead. It’s okay to apply this “rule” inconsistently, if you want to connect with your happy-hour buddies online while keeping a distance from the higher-ups. But “the colleague sitting next to you today could be your boss tomorrow,” says Post Senning.

I’m trying to expand my industry contacts through LinkedIn. How can I avoid pestering people I don’t know yet but want to be part of my network?

That may be tough. Trying to connect with strangers mainly to promote yourself or sell your services comes across as opportunistic. Plus, your target can select “I don’t know this person” after ignoring your request, which blocks you from future attempts to reach out and could raise a red flag with LinkedIn. To increase your chances that potential contacts will consider your request, include a message explaining why you want to connect, says Gottsman. For example, perhaps you would like to collaborate with them on a future project.